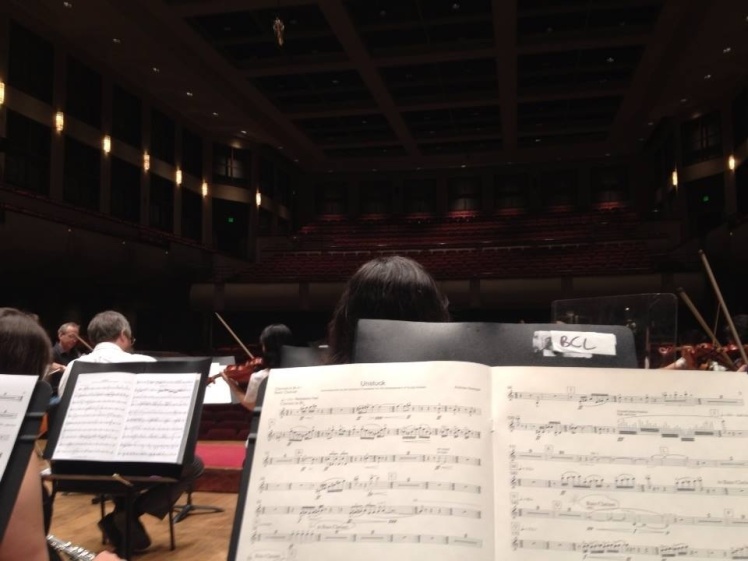 For some reason today, I thought about some of the more embarrassing moments I have had as a performer. I preach to my students, “Never miss a gig!”, and I have definitely practiced that philosophy over the years. I’ve played concerts with a broken ankle propped up, with food poisoning, with walking pneumonia, right after the death of a loved one, have driven through straight-line winds…the show must go on. One particular experience, though, definitely pushed the boundaries.

I had already played one concert of two with the Alabama Symphony, doing a staged version of Porgy and Bess. I was playing bass clarinet and had lots of exposed solos, playing for a demanding conductor. The first concert was magical, and I was looking forward to the Saturday evening performance.

And then, the fatal mistake: we ordered pizza for dinner before the concert. Just a simple cheese pizza, but something went wrong. Terribly wrong. I went to the concert hall an hour before the concert to warm up, and started to feel off. Things rapidly spiraled in a bad direction, and I went next door to the music building and was violently ill. I immediately felt better and thought I would be able to carry on and play the concert, so I went to my seat and prepared to play.

The concert began without incident, the music swirling around the hall, the singers bringing Gershwin’s characters to life. I played my heart out during the first half…and then I felt the by now familiar pangs of food poisoning as intermission began. I let the personnel manager know what was happening, and then went to the ladies room to be violently ill yet again. This couldn’t be happening- I never miss a playing commitment!

After the next bout of illness, I felt as if I could make it through the second half of the concert. I had several important solos and really needed to give it my best attempt. I didn’t want to let my colleagues, the audience, or myself down. I had never missed a gig in my life, and I was determined that this would not be the first time.

The conductor gave the downbeat, and the second half of the concert began, my stomach was already in turmoil. I did my best to take my mind off of my nausea by focusing on the music, being in the moment, but it quickly became more and more difficult to focus at all. I looked around the very full stage- this concert involved a very large orchestra, filling the stage. There was literally no escape route for me. I began to panic, as things with my stomach were rapidly reaching Defcon seven. I glanced at my clarinet colleagues sitting on either side of me, already feeling bad about what I knew was inevitable.

I attempted to play, and then felt my stomach begin to lurch. Sweet mother of God, please no. I gave up, looking down at my lap as the music continued, now without my solos. My bass clarinet sat forlornly on its stand, mute. I knew the conductor was was looking at me, could feel the concerned glances of my clarinet colleagues, but I was totally focused on trying to hold it together until the end of the concert. I thought I would make it, until at last my stomach heaved. There was nothing I could do, and so, in front of fifteen hundred people and a stage full of musicians, my stomach gave up the ghost and all remaining pizza…over and over and over.

I did my best to keep things contained to my lap, but was mortified. I felt horribly that the musicians around me had to continue playing in the midst of my gastronomical Armageddon. I wondered who in the packed house had witnessed my shame, as I kept my head down and hands containing things in my skirt as best I could.

Finally, the beautiful music came to a close, the thunderous applause filled the hall, and the concert ended. My husband managed the hall at the time, and he and his employees came to wipe me up and somehow get my weak as puppy water self to the car for the ride home. I felt like I wanted to die. One of my sweet clarinet friends had packed up my instrument, and everyone was so kind…though I’m sure they were horrified and thankful to be away from ground zero. I was glad to be away from ground zero, too, thankful to be home where I could be ill without an audience.

I have never in my life had such food poisoning before. I was sick in bed for three days, missing a church playing job for the first time in my life. I had always wondered what would happen if someone got sick on stage and couldn’t escape, and now I had an intimate knowledge. To this day, I still look for an escape route in every concert I play, just in case.

Times like these are challenging, humbling, but they also teach me that every rule can be broken. I now know that if I am truly ill and incapacitated, I will admit defeat, call in sick. Yes, the show must go on, but sometimes it must go on without me. At least when I am doing my geyser impersonation.

Okay…so does anyone have any Tumms? Just remembering this…ooh, boy.