i have written before about my ‘Yoga Mom’, an eighty-four year-old African American woman who has been in all of Dan’s yoga classes for the past five years. She was a fixture at the Downtown YMCA, sometimes going to classes two times a day. Mrs. Andrews, or ‘Mz. A’ as we all called her, was a pistol, never hesitating to tell people just what she thought or how things should be done. Even sweet Dan had to have a gentle talk with her about letting him teach the class. Even so, I adored her, from her cantankerous ways to her amazing spirit. She was an inspiration to me about aging with pizzazz.

Ms. A had been diagnosed with pancreatic cancer nine months ago. We went to visit her in the hospital and she lit up like a Christmas tree when we walked in. She loved us both, and having never had children, she had sort of adopted us. She would come to hear me play with the symphony at outdoor concerts, and was there to support me at Mom’s service. She was incredibly loyal and protective of Dan in his class. He always put a yoga mat out for her first thing. And lord help you if you happened to get in her spot. She would rake you over the coals six ways to Sunday. If you walked in late and didn’t close the door to the heated studio all the way, you would be berrated, “Close the door!” in her sternest voice. The door was quickly closed. I was proud of her, this octogenarian who could get up and down in yoga poses, a woman who challenged herself every day to keep on moving. She told us she loved to eat, so she had to exercise. She had lost her husband many years before, so it was a social outlet for her as well.

She had a series of surgeries and never quite seemed to bounce back. The last time we visited her in the hospital, I was shaken by her appearance. Our unsinkable Mz. A looked old for the first since I had known her. She looked tired, defeated, and I shed some tears as we kissed her forehead and left the room. Sure enough, she passed away last Sunday. Dan dedicated a beautiful yoga class to her, putting her mat in its usual spot and placing a candle on it. He shared some funny stories and included some of her favorite yoga poses. I felt her spirit in the room with us.

Mz. A was also very active in her church. The interesting part was that she was a Catholic…an African American Catholic in Birmingham, Alabama. Not the most common thing here in the heart of the Bible Belt. We went to her funeral at Our Lady of Fatima Catholic Church, located on the way to The Home for Wayward Seniors where Mom lived. Walking in to the church was like walking into a different world, and it was fascinating to me. Birmingham is a richly diverse city, but we don’t often get a glimpse of the rituals of our different people. My first husband was Catholic and I had attended many Masses, but this was unlike any Mass I had seen before.

We walked into the church as a young woman sang an old hymn that I recognized from growing up in the Southern Baptist church. There was an army of woman all dressed in white with sashes and hats that looked like white Shriner hats all sitting together filling many pews, and men in capes wearing hats with plumes- it was really impressive to see. We found that they were all members of the Knights of Peter Claver, an African American Catholic group. 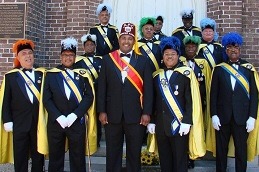 It was beautiful to see them all there, united in their duty of seeing their sister sent off to Heaven in style. It seems that Mz. A was also a member of the Knights of Peter Claver…and we knew she had to be upset, because her family didn’t find her special uniform for her to be buried in. The Service was a mix of high Church and Black Southern Baptist. A Mass with lots of incense mixed with spirituals. I loved every minute of it, but my very favorite part was the end when people got up to tell stories about “Deaconess Andrews”. Every single tale made Dan and me laugh- as it did to the rest of the congregation. We all knew and loved her- even though she fought with everyone she met at some point or another. It was heartwarming, and it made me happy to know that my Yoga Mom had had such a full, rich life, and that she was loved and respected by so many. How wonderful to attend a funeral where there were not only tears, but lots of laughter, too. It truly was a wonderful send-off, and I think she would have approved.

I told Dan that I was sure Ms. A was up in Heaven telling God what to do, getting everyone in line. In fact, that may have been that big storm that went through today with all of the thunder and lighting. I hope she is having a blast. Namaste, Yoga Mom- we love you.