Today was the last day of ClarinetFest,  filled with closing ceremonies, recitals, farewells. and clarinet choirs. The exhibitors had already packed up, as Sunday is traditionally the shortest day of the conference, and many people had already departed for home or for the next leg of their European travels. It has truly been a wonderful conference in every way, an experience that has changed me, given me much needed gifts of confidence, focus, and growth. I needed this trip more than I knew, and I’ve come to really understand that doing this adventure solo was just what I needed to push me into change. 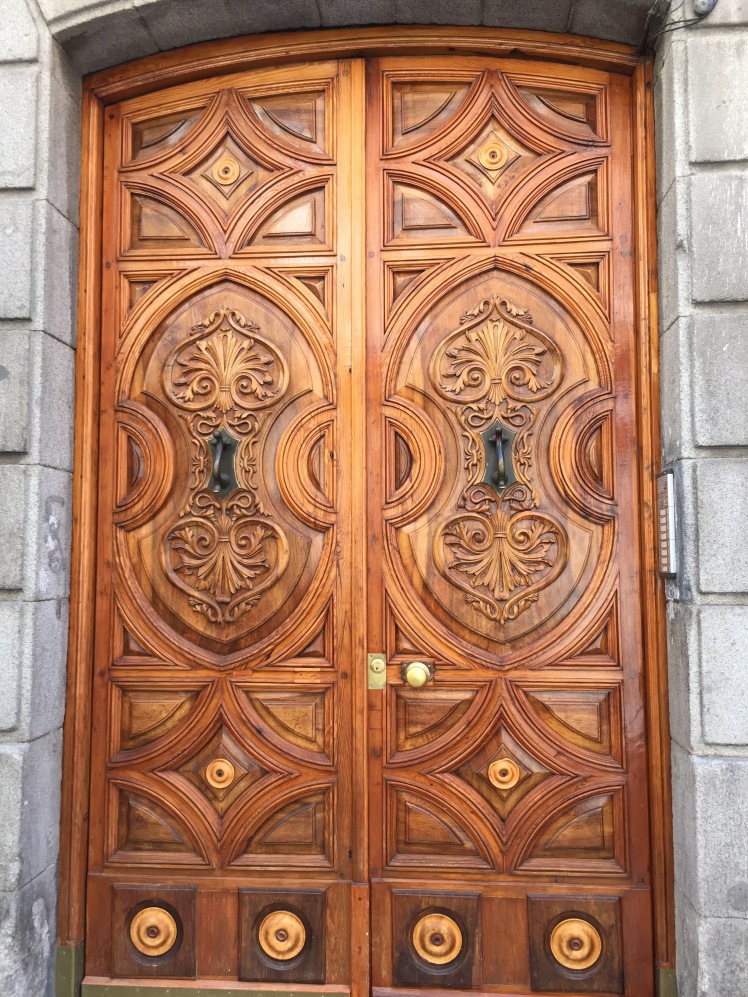 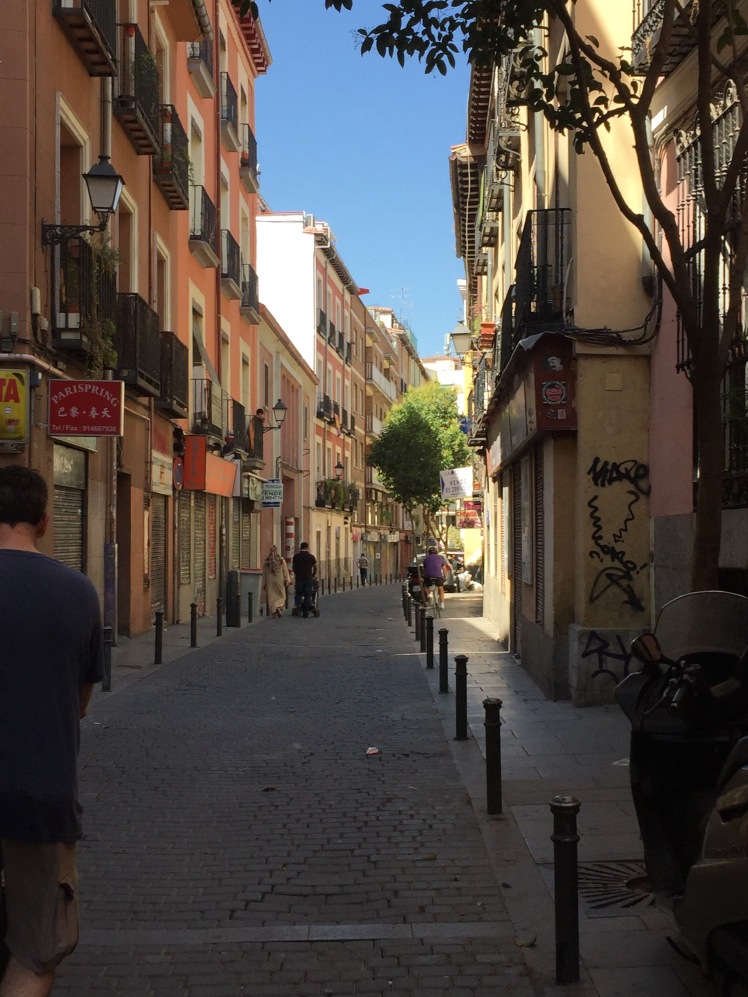 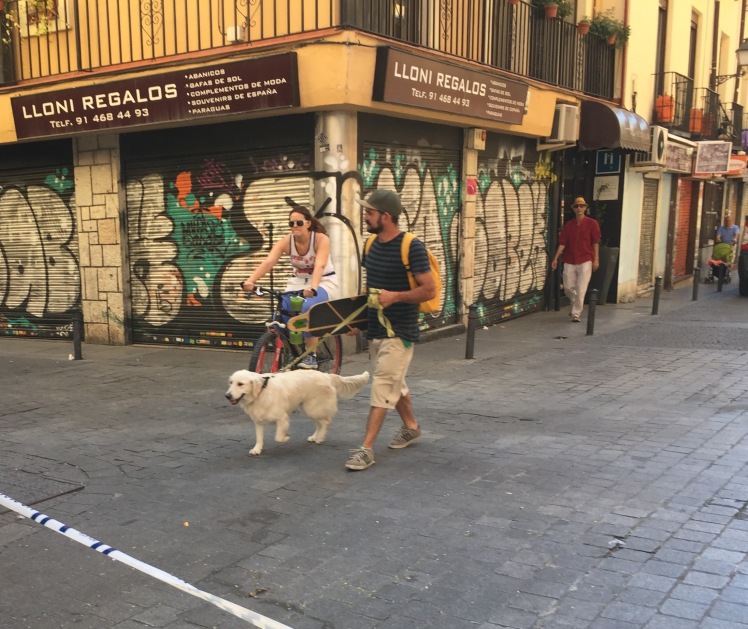 Once our official Board of Directors duties were over, two of my Board colleagues very kindly let me tag along with them to spend the afternoon at the Museo del Prado, the place in all of Madrid that I had hoped I would be able to see. There was one catch…our international representative on the Board, Stephan, had to deliver a borrowed contrabass clarinet to a colleague from the Netherlands who was departing with his large clarinet choir via tour bus in another part of Madrid, fairly close to the Prado. If you’ve never seen a contra case, it’s like carrying around a small coffin…quite an interesting thing to attempt in the busy streets and plazas of Madrid. We took the metro to the Vodophon Sol stop, and came up out of the subway into the intensely bright sun and clear blue skies. The Plaza del Sol was hopping, with tourists and street vendors everywhere. Not the frenetic madness of Rome, but still chaotic, with mounted policeman on beautiful horses walking around to make sure order was kept. 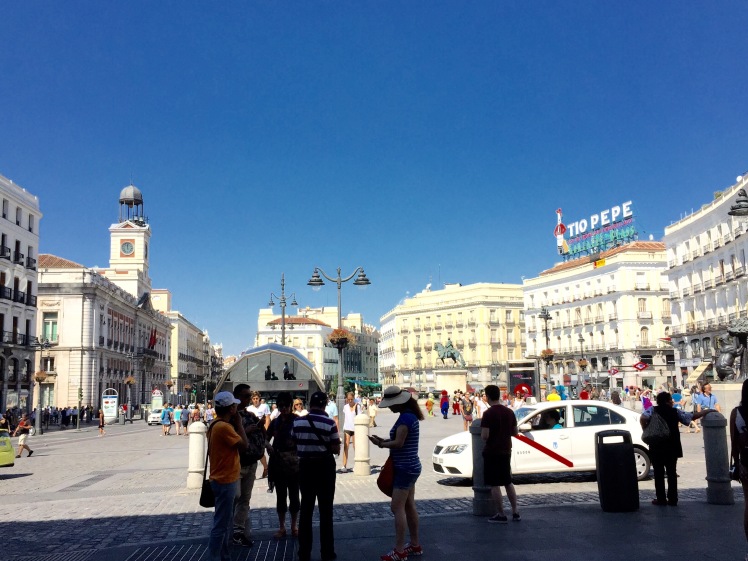 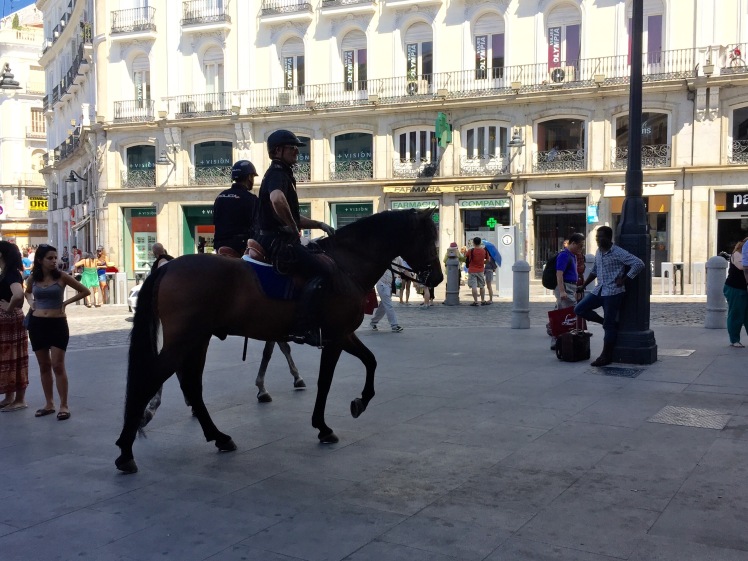 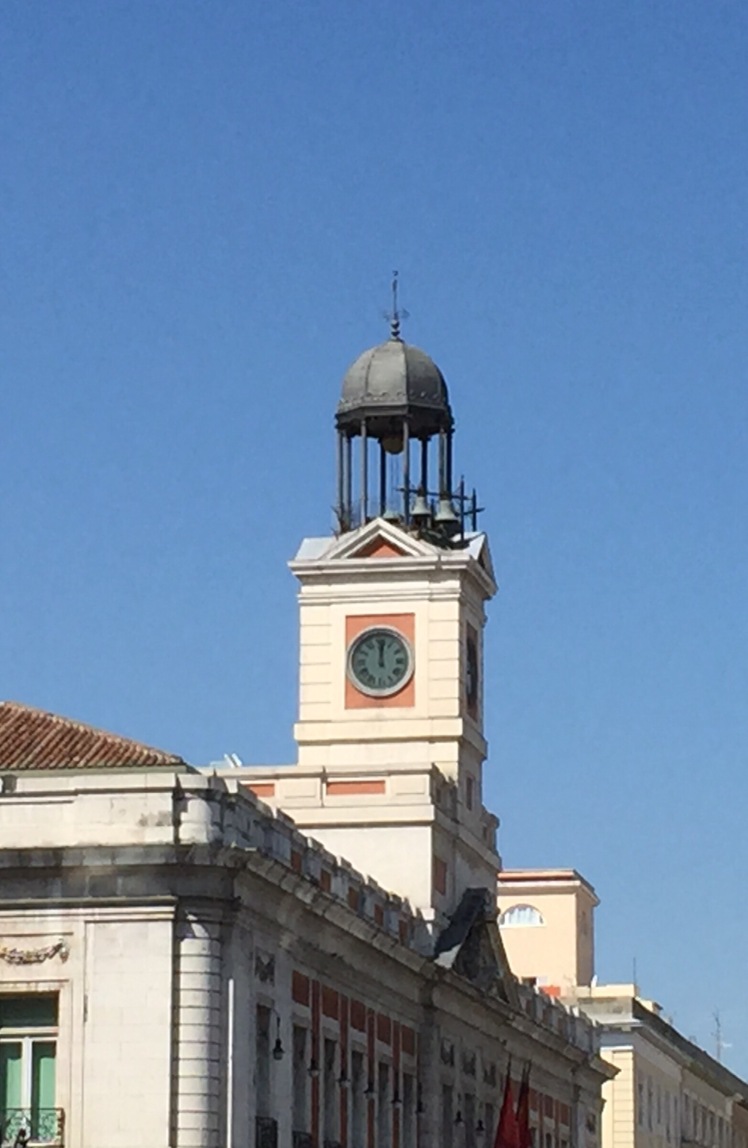 There was a huge Apple Store situated prominently in the square…and yet again I was struck by the sight of the intensely modern and new melded with the existing ancient buildings of the city. The architecture was influenced by the Hapsberg rule, with the buildings looking as if you had just time warped into old Vienna. Shooting off from the plaza were narrow winding streets….and somewhere out there was a bus from the Netherlands waiting for us to deliver a certain large cargo. Using Google Maps, Stephan plotted our way, stopping every so often to text John De Beer, the man waiting for us. We walked…and we walked….and we walked. Finally, we spotted the large bus with the distinctive writing of the Netherlands on it. Success! After introductions and a nice visit, we set out to find the Museo del Prado. Finally, the time had come. 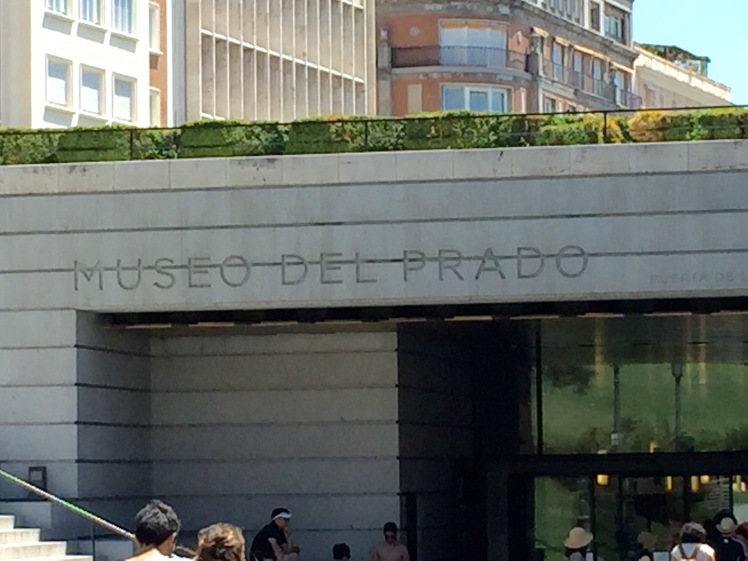 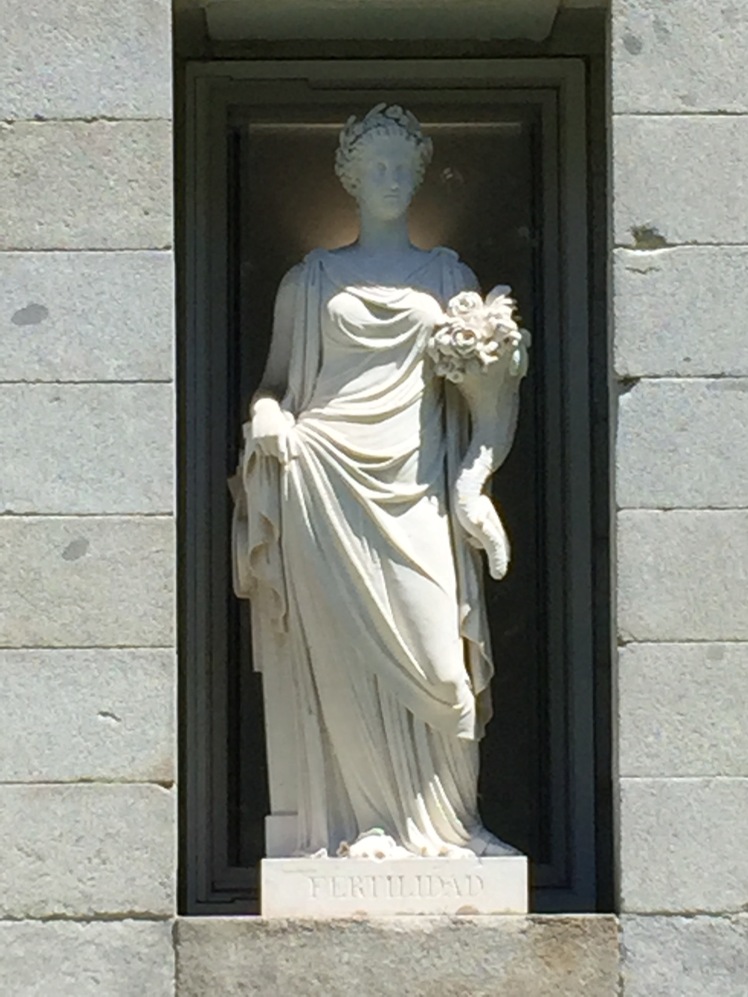 We picked up our tickets and made our way to the front entrance, which looks surprisingly low-profile and humble…until you walk through the doors. So much space, and a beautiful use of natural light throughout the museum. As we walked into one of the opening chambers rimmed with beautiful statues, I began to tear up, just an overwhelming emotion from the beauty I knew I was about to see- had already seen from the very beginning of our visit. What a collection they have, spanning many centuries. The dark works of Goya began our exploration of the museum’s treasures. The paintings are not covered by glass- just a rope stanchion about a foot or so from the works of art gently reminds you not to touch…along with the many museum workers who watch everyone like a hawk. 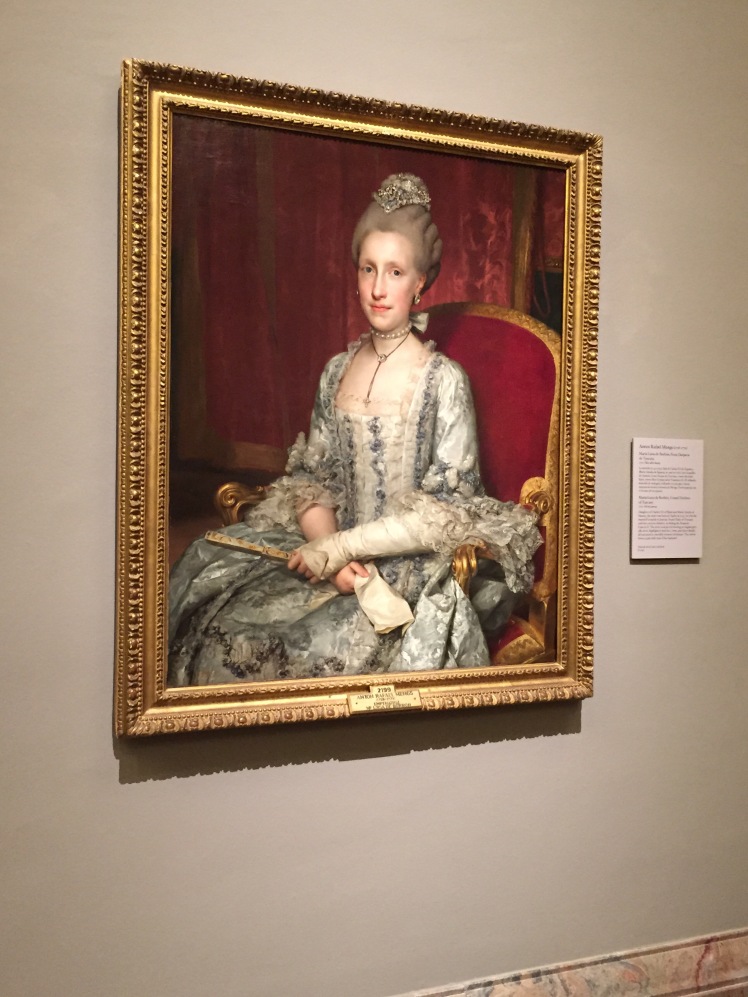 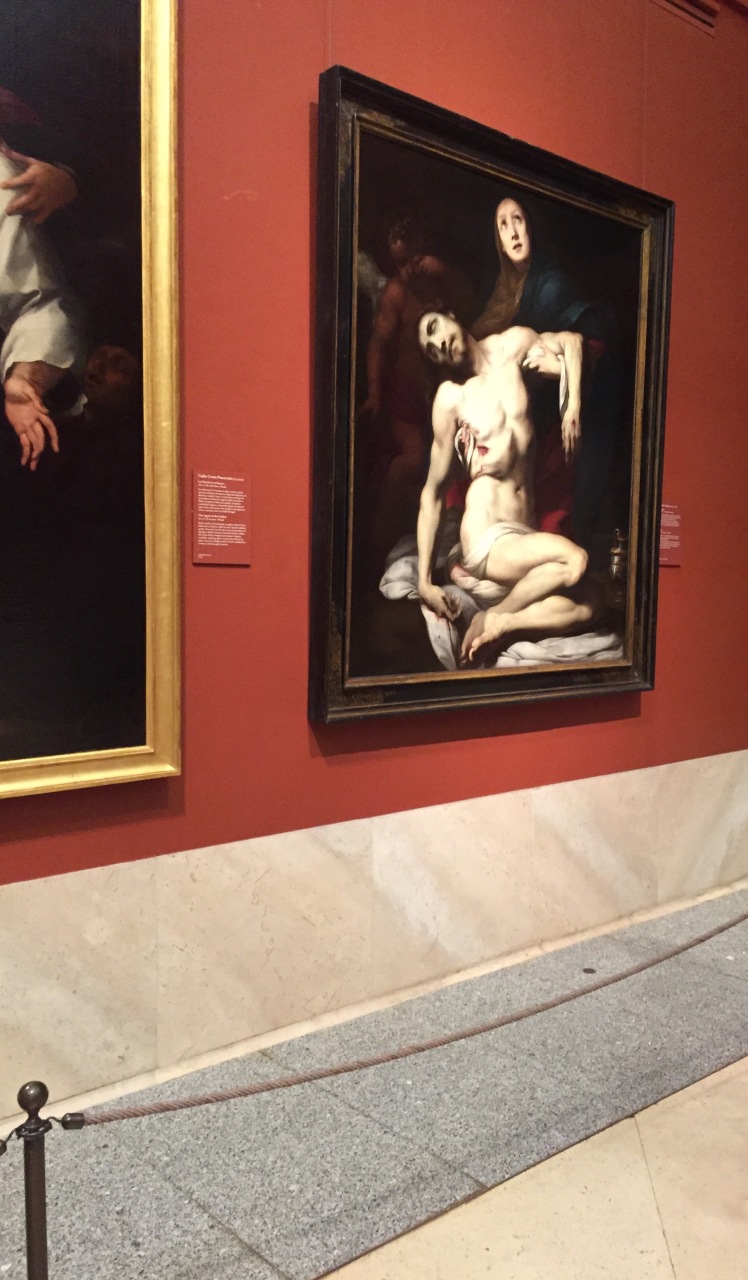 I stood across the room and then walked closer to the paintings, noticing the different perspective, the use of color and light, the brush strokes made by these long-dead masters. Some of the canvases were huge, and I wondered where the artist even started when beginning such a work. How does one see the big picture when working with tiny brush strokes? I am sure it must be like when a composer sets out to write an entire symphony…there is the seed of an idea, and then they build upon it, having sparks of inspiration and intuition as they work. I am in awe of artists, in their ability to picture something of beauty- or something not beautiful, but meant to move us and make us think- and then be able to create it with their own hands. I enjoy the historical aspect of art, how it reflects the state of the times- good or bad. We are art, and art is us. When we will we ever truly see that? 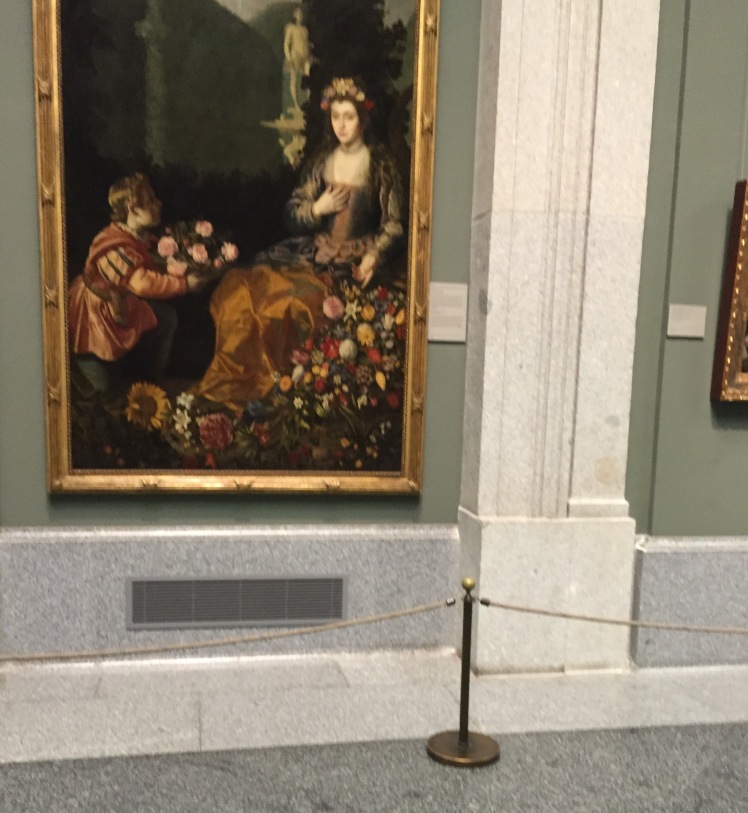 As I studied the many portraits, I read about the subjects and wondered what it was like to sit for an artist in the 1500s and 1600s. Some of the works captured such character and life in the faces they painted. The elaborate costumes, the privileged lives of royalty and wealth. It was also interesting to see how many dogs were included in paintings of that era- dogs of all breeds, shapes and sizes. I hadn’t ever really noticed that before, surprisingly. 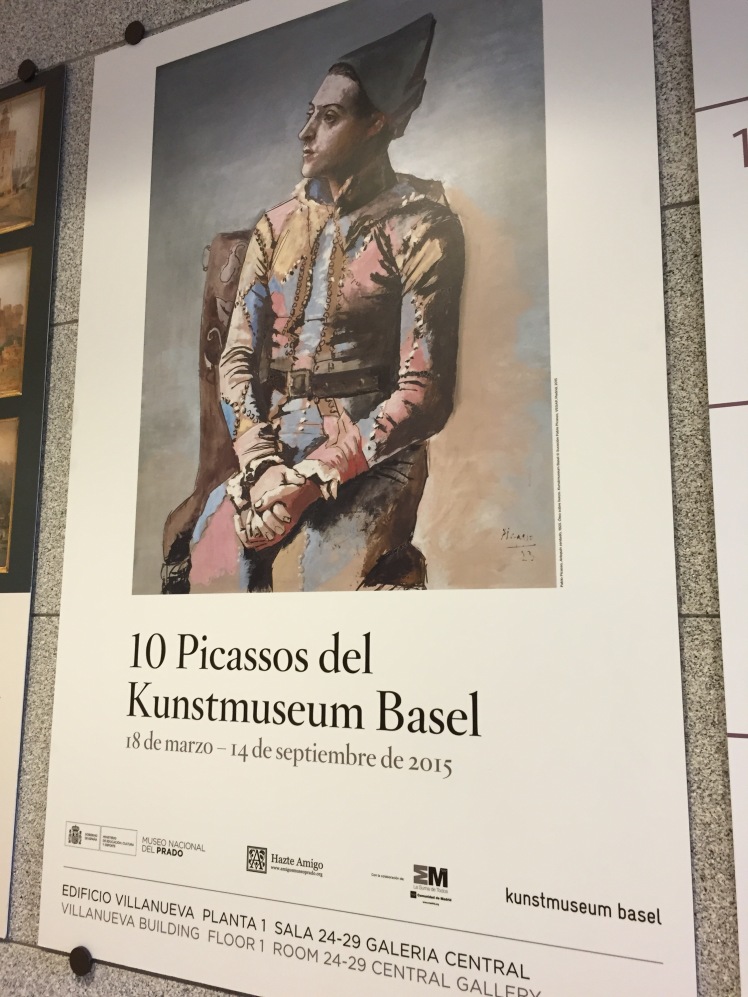 My favorite part of day was the Piccaso exhibit, a collaboration between The Prado and the Kunstmusem Basel, with ten of  Piccaso’s varied works placed down the center of the long gallery, while the outer walls were graced with the works of Titan and Rubans, among others. The stark contrast between the styles of composition were fascinating. One of my favorite Piccaso’s was his ‘Harlequin’, showing his foundational training in classical techniques.  So many people want to skip steps to achieve greatness, but you can’t really do that in anything worth doing in life. The foundation has to be built, the rules understood, before you understand how to break those rules and go off in new and exciting directions as Piccaso so bravely did. 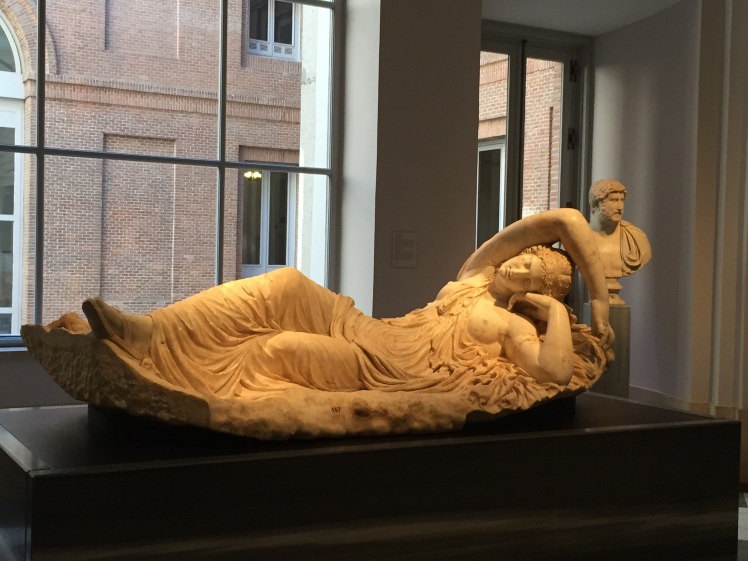 By the end of the day, we had walked from 11:30am until 7pm- with the exception of a wonderful lunch by the Plazza Mayor, where sat outside and enjoyed the restaurant’s  mister as a break from the unforgiving sun.  It was time to head back to our hotel and gather with the others for one last celebratory dinner before we were to leave early the next morning. We chose to eat at La Tape, enjoying sitting outside on an absolutely beautiful evening. Wonderful tapas and drinks, and lots of great conversation and laughter. We had a lot to celebrate- the conference was a huge success, with 1,400 clarinetists in attendance, five days showcasing many of the most amazing artists of the clarinet in the world. As with any conference, there were some interesting moments (like when one of the artists became violently ill with food poisoning and threw up on a student in a masterclass….personally, I’m glad that I missed that one.) but over all, it was a roaring success. I was incredibly proud of the contributions by my fellow Backun Artists- their performances were unparalleled. 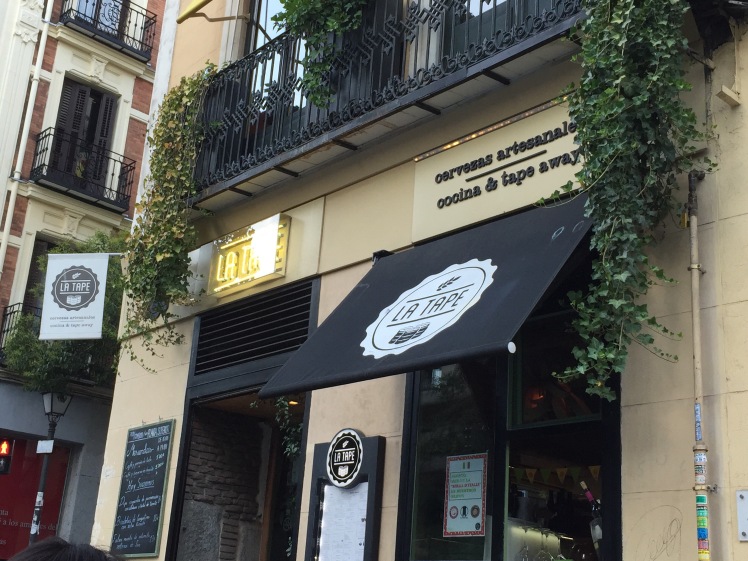 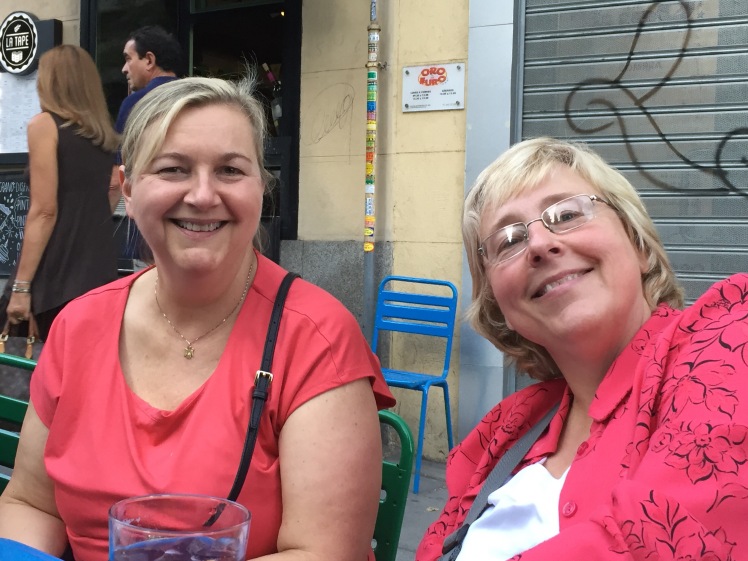 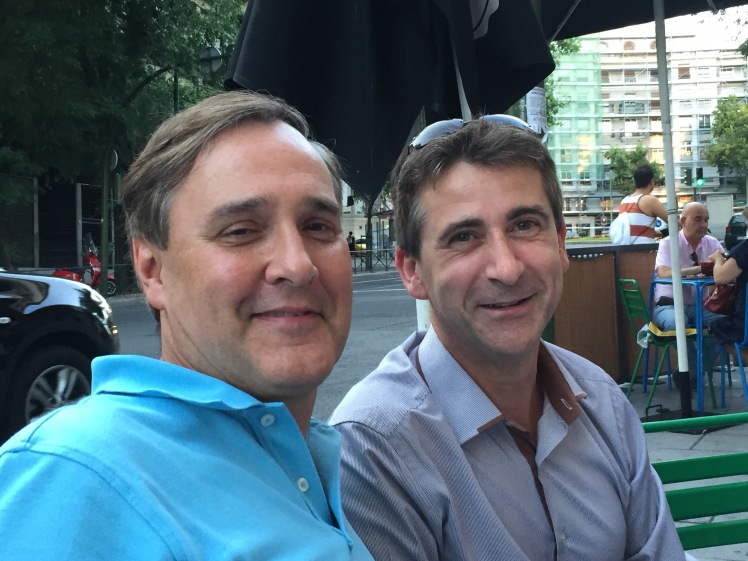 And now, it’s time to go home, back to my sweet Dan and my furry little family, back to teaching…back to my life. The thought warms my heart and gives me butterflies. Unlike the butterflies I felt as I prepared for my first solo trip to Europe, these butterflies are most definitely inspired by excitement…and love. So much love. I know that somehow, somewhere, my mom is smiling. 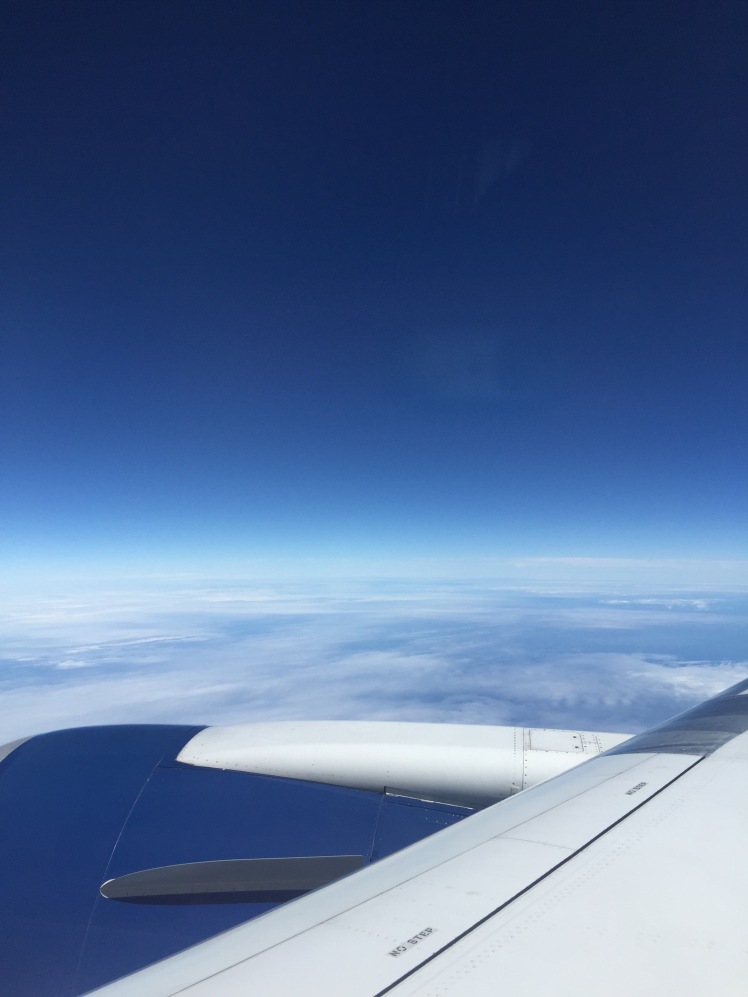