Another reason I know that I am the daughter of Dorothy Williams? I like to rearrange furniture. Mom used to get a bug to change things around in our house, and I’d come home from school to find a whole new world. I quickly caught the bug and would often rearrange my bedroom and feel the thrill of having a “new” room. There wasn’t much money to speak of, so we found ways to have fun that didn’t cost anything. We also played a lot of Chinese checkers and ate a lot of potatoes. We knew how to have a good time in the old house on Westwood lane. 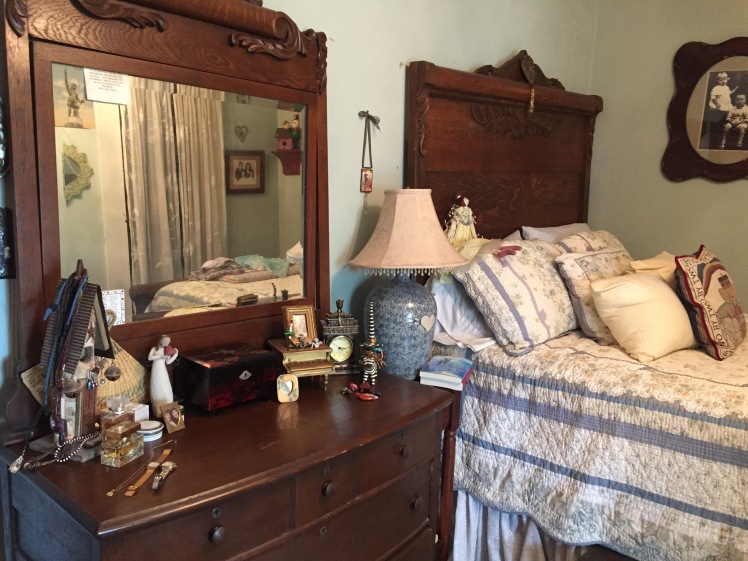 Yesterday I caught the bug again. I walked into our guest room, looked at the old oak bed that my mom was born in, and started puzzling on what I could do to create a new look. The difference this time around is that now I have Mom’s chest-of-drawers in the room, so the options in the oddly shaped room are few. That didn’t stop me, though, and I began taking down pictures and scooting things out of the way in preparation for moving the big bed. I purposely did all of this while my husband was at Lowe’s…a sure sign that the  endeavor would be fraught with peril. It was.

After taking down the pictures of Grandma and Mom as a little girl with her brother, Ernest, I took the heavy oak mirror off of the dresser and carefully propped it against the chest-of-drawers. Next I scooted the dresser as far as it would go, completely blocking the door and any hope of escape. It was now time to turn the bed around….in a space that is incredibly tight. I scooted, I turned, I scooted some more, until the footboard hit the wall. Nope…I needed more space. I began to sweat profusely, but couldn’t get past the dresser barricade to bump the air conditioner down a notch. I attempted to pull the bed out further before trying to turn it again, this time nicking the paint on the wall. I cussed profusely, and then immediately looked at the pictures of Grandma and Mom and apologized to them. There would be a lot of apologizing over the next two hours. Sorry, ladies.

I scooted the bed further before trying to turn it again and found myself trapped, wedged in completely on all sides by the bed and other pieces of furniture. It was a conspiracy I have no doubt. Damn snobby oak. I decided to try to scale the very tall bed, and yelled out in pain when I landed on the knee I fell on last week. This really was not how I had planned on spending my holiday weekend. I felt the pressure rise, as Dan would be home from Lowe’s any time now, and I just couldn’t let him see this debacle that I had created. I hopped over to the other side of the bed and tugged from that end, further wedging the bed between the two walls, scraping more paint. After a primal scream escaped my lips, another apology to Grandma and Mom, I crawled – carefully- back over the bed to the other side. Finally, success! I was able to swing the bed around. I was drenched in sweat, but felt such a sense of accomplishment…until I realized that there was a problem (other than scraped paint and scratched hardwood floors); now there was no place for the dresser. You have got to be kidding me. That DMA in music did nothing for my common sense, obviously.

At this point, I heard the door chime- my husband was home. There was nothing for me to do but throw myself on the mercy of the court. I scooted the dresser enough so that I could peek around into the hallway…”Honey, your wife has done something stupid…again.” Dan looked into the chaos of the bedroom and shook his head, “Honey…I really wish that you hadn’t done this. Your back will be out again.” He kindly offered to help me move everything back, but I explained that it was a very tricky job (obviously…), and that at this point it was an issue of pride. I had to do this myself. First of all, I decided to make at least a part of this experiment worthwhile, vacuuming and dusting everything, including under where the bed had been. Hey- that needed to be done anyway, right? Then, more scooting, more sweating, more hopping over the bed, more cussing, and more apologies to Grandma and Mom, and finally, the bed was back where it had originally been. I put all of the other furniture back in place and re-hung the pictures over the bed. Done- and only two hours of my restful holiday gone, and one achy back gained.

I looked around the now neat and tidy room and smiled. I had no doubt that if Mom could see me from Heaven that she was laughing her tail off (other than shaking her head at the cussing parts). She would tell me, “Neese, it hurts to look pretty,” like she’d say when she’d brush my hair and the comb would pull the knots. Sometimes you have to go through hard stuff to get to the good stuff. Yes, Ma’am, I know. I also know that the bedroom furniture will be staying put for quite some time. Now the living room, on the other hand….Nah, I think I’ll head out to pull some weeds instead. I need yard therapy after this self-induced stress-fest. Sophie and Coops agree.