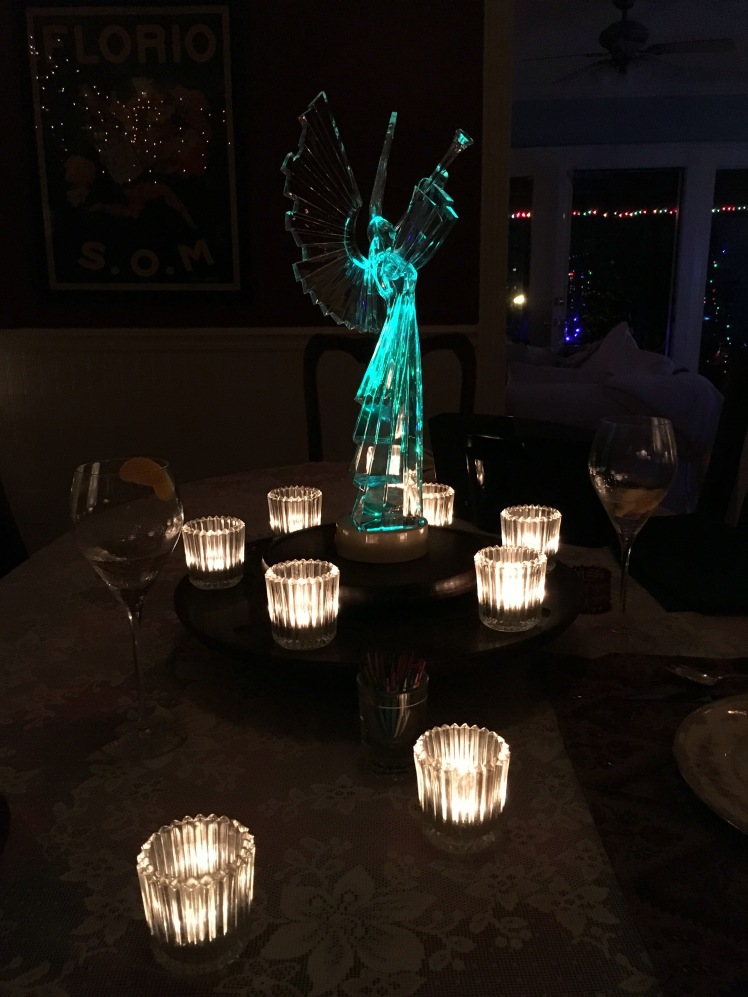 I woke in the middle of the night, panting, my heart pounding.  I had had a vivid nightmare that seemed so very real, too real. A thread running throughout was that someone was trying to kill me, a common theme in my dreams lately. At the end of the nightmare, Dan had picked me up in his Mini Cooper and we were driving down the road, when suddenly a large black limousine came toward us on my side of the car.  I yelled to Dan and braced myself for the impact. The Cooper spun around from force of the crash, and I screamed to Dan that someone was trying to kill me.  He let the car roll to a stop, turned to me and said, “No, Honey, you are trying to kill yourself.” As soon as I woke up, I realized that this nightmare was a many-layered New Year’s gift, a watershed moment for me. It was a message from my own heart to make some changes and break down some self-imposed barriers.

Last year’s resolutions of losing weight and eating more healthfully left their mark-  I have lost about fifty pounds and have maintained it, faithfully logging my food and exercise each day. I feel strong, I feel healthy…but there is another part of the equation. The dream made me realize that I have an intense fear of failure, a fear so strong that I sometimes set myself up for failure by not doing something so that I have an excuse as to why I didn’t succeed.  I also fear that if I do succeed, what if it’s still not good enough? I  see it for what it is now- my book that has still not found a publisher, the CD recording that awaits editing…so many things that would have been completed if I hadn’t held back in fear of them not being successful. I vowed to myself in the middle of the night, still reeling from the nightmare, that I will work hard to change those behaviors that are self-defeating. I will be fifty-three next Thursday….if not now, when? I don’t want to become that person who becomes old by never realizing their potential, never growing into who they could be. Growth and change keep us young, no matter what the lines on your face might say. The energy that comes from that eternal search to become….it is a magic elixir that I want to taste.

I’ll admit it, I am already terrified of what I will find.  Maybe I won’t be good enough for some of the things that I tackle.  I’m trying to rethink that terror, though, as words are important and have such power over our minds. When my students come to me fearful of upcoming performances, I tell them to use the word excited rather than terrified.  When we do that, something shifts, we begin to see the possibilities rather than the fear. I am also working to see that failure isn’t necessarily a bad thing, as when we fail, it sets us on a different path…perhaps one that was meant for us all along. I need to channel the energies that I put into getting my health and fitness back on track and use them to help me pull myself out of the mire of self-doubt. I have heard a niggling inner voice for quite a while now…You can do this- you just have to let go and believe. It’s time to listen. That letting go part is the hardest thing, as I have conditioned myself since childhood that I have to be perfect, I have to be the best at what I do. Perhaps this is the year when I will redefine what perfection means to me, when I will allow myself to be human. I feel the change coming, like a dam ready to burst, releasing a flood.  Ready or not it is coming, and I am excited to see what awaits. What’s the worst that could happen- fully immersing myself in life? It’s high time.