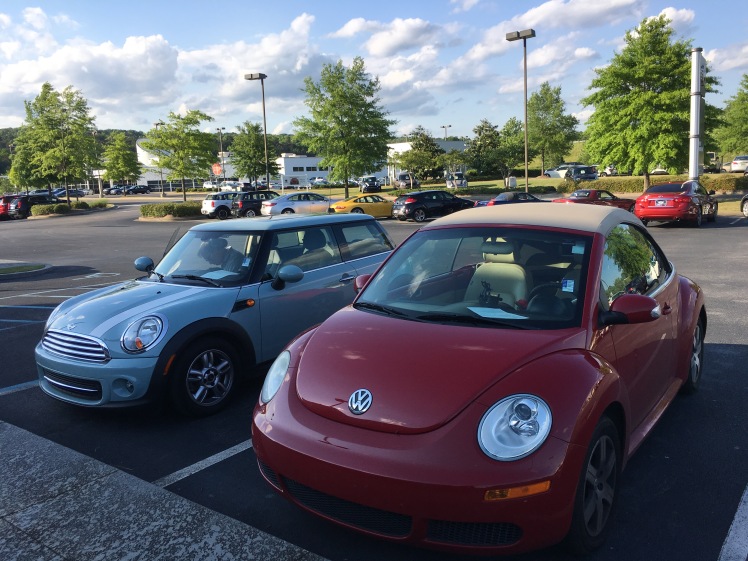 The Blue MaGoo and Buggy….

I left physical therapy yesterday and headed to Mini of Birmingham. I was simply picking Dan up from dropping his car, the Blue MaGoo, off for a checkup. On the way, I looked at my dashboard and saw that the Check Engine light was on. Sigh.  We have poured thousands of dollars into repairs for this ten-year-old car over the years, and I knew the next repair would be a doozy. My first car ever was a red 1966 VW Bug that Mom traded an antique bedroom set for. I absolutely loved that car and was so excited back in 2006 when I could finally get a new version of the iconic car. It was the first car I had ever gotten to pick out for myself, as I’ve always driven hand-me-down cars (gratefully, I might add). We had so much fun taking the convertible on many trips to the mountains and the beach…until things began to go wrong.  I dreaded telling Dan about the latest car issue- we are just coming off of a huge and expensive  foundation renovation to our home.

As I pulled up to the dealership, Dan huried to the car, never giving me a chance to tell him about the engine light…

Honey, do you have a few minutes? I’m talking to them about trading both of our cars in and getting two new ones.

After I picked my jaw up off of the ground, I laughed. He had to be kidding. The Blue MaGoo was only three years old, and, as I said, we were just coming off the foundation project. Maybe I misheard him? Also, I had listened to story after story about Dan’s Dad, who was famous for going to “just look” at cars and coming home with a new one every single time. Obviously the apple doesn’t fall far from the tree.

Come on! Let me show you what I’m talking about!

He excitedly led me to see a Mini Roadster convertible. Next to it were several Mini Countryman, the larger car that I had dreamed of getting for us to travel in more comfortably with the dogs, our bikes- an adventure car. I giggled nervously like a school girl.

Which one do you like? We’re just running the numbers, trying to see if it will work. If we can’t do it, we won’t. There’s no pressure.

When I finally told him about the Check Engine light in the Bug, I saw a gleam come into his eyes. He was a man on a mission. Still trying not to hyperventilate, I began to get into the excitement of the moment. My husband is so good for me in countless ways- one of which is in the area of spontaneity, something that is often difficult for this routine gal. I had planned this first real day of my summer break- I had things to do! And it looked like those things were going to wait as we pursued a dream. Dan is retiring in one year, and we had hoped to make sure we were set with two safe and dependable cars.

The convertible issue was a special one. When I first met Dan, he had an adorable VW Cabrio convertible, and the top was always down. He is my sun man, never happier than when he can feel the warmth of the sun and the wind blowing his hair. When he was layed off from a wonderful job several years ago, he sold his beloved car and drove a scooter for several years. It broke my heart. When he had an accident on it, that was it. We sold the scooter and he bought the Mini Cooper, Blue MaGoo. We had decided that we would always try to have one convertible, as we loved them so much…and now the one we had was dying a slow and expensive death.

Our salesman was wonderful- absolutely no pressure, patient, and personable. We set things up for him to check the numbers, and then I dropped Dan off at work to finish up a few things and I headed home to let the pups out. At lunch we talked about our options, with Dan finally deciding that he would keep Blue MaGoo a few more years, but that I had to have a new car today. I may have broken out in hives, but that could have been the Mexican food we ate. Spending large sums of money and debt of any kind terrifies me, even though I know it’s a reality of life. <breathe, Denise, breathe…>

We returned to the dealership with our minds made up…until our salesman showed us the numbers…for just a little bit more, we could trade both cars in and go home with two new ones. For real. We both started laughing at this point.

And so, many hours, many minor panic attacks, many signed forms later, we said goodbye to Buggy and Blue MaGoo, and welcomed the two yet-to-be-named cars to our family (though I’m pretty sure mine will be ‘Poppins’- it is a British car, and, well, I am Mary Poppins).

All four cars at the end of the day…

I actually teared up as I patted each car goodbye and whispered thank you’s to them. They have both taken us on many fun adventures. But, spontaneity ruled the day, and it was time to say goodbye to the past and hello to a future filled with new adventures. I’m still hyperventilating a bit, but I’m ready to roll. Spit spot! 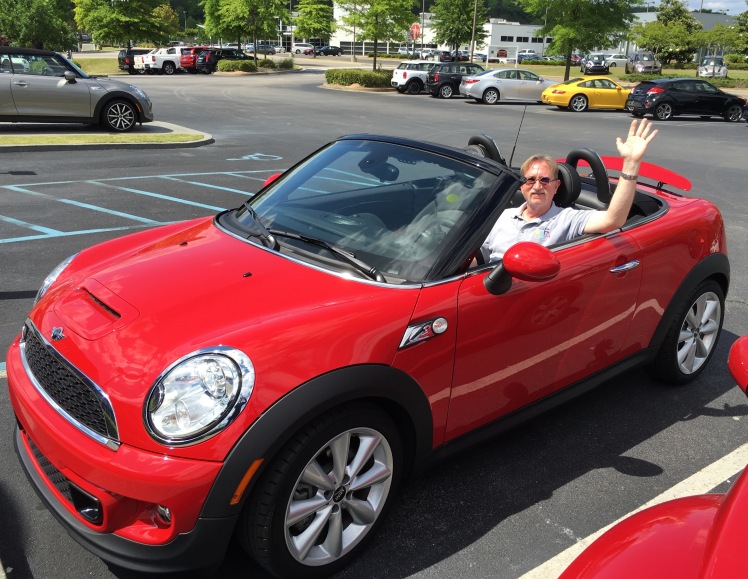 2 thoughts on “On Spontaneity, Goodbyes, and Hellos”