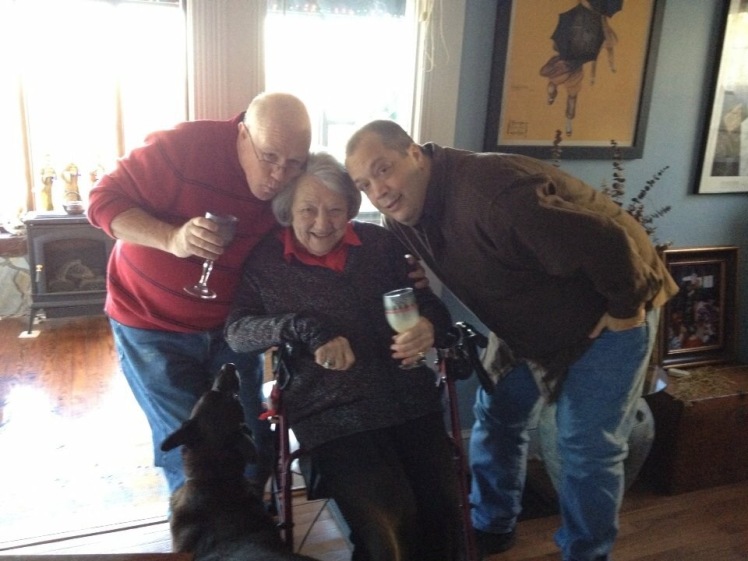 Those early morning calls are rarely good news, and I knew when I saw it was my friend Darla calling that something was wrong. She had just texted me days before to call her, letting me know our friend John was in serious trouble in the hospital and I needed to get there as soon as possible to support his partner of almost thirty-two years, Wayne. After a flatline scare, John was stabilized and sent home. We were so grateful for our friends that the worst didn’t happen. This time, however, the news from Darla was what we had feared….Wayne went in to check on John and found that he had passed away during the night. Thirty-two years of life together, soulmates, best friends, one of the most loving and generous couples that I have ever known. My heart broke for Wayne in that instant. I jumped out of bed, fed the dogs, threw on some clothes and raced the short drive to be with my friend who is like a brother to me.

It’s funny sometimes how friendships begin, how you are just meant to have some people in your life. When I first moved to Birmingham fifteen years ago by myself to start a new life, my neighbors across the street, Bev and Darla, befriended me. We shared a love of old houses, renovation, dogs, and good cocktails, beginning a friendship that would grow into true sisterhood over the years. When my oldest brother died and it became clear that my mom needed to move to Birmingham to be where I could help her, Bev and Darla opened their home, inviting Mom to move into the large apartment that was one floor of their five and a half story historic home, just down the street from Dan and me. They showed such incredible kindness to us, opening the door to my mother’s greatly improved quality of life, something we can never repay. 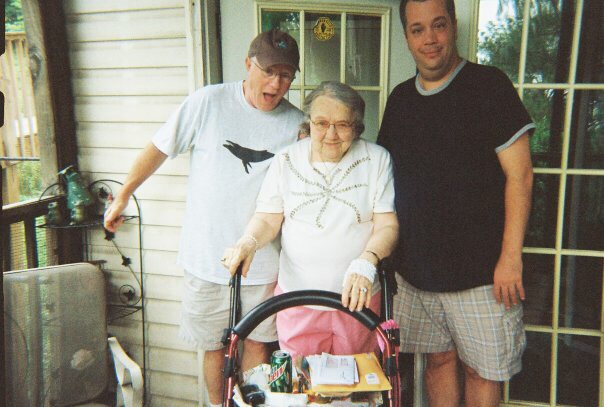 Wayne and John with Heavy D….

The Girls (as Dan and I lovingly call them) had two close friends cleaning house for them, and we decided to hire them to clean Mom’s apartment, too. Wayne and John began coming to clean each week, and as time progressed, spent time talking with Mom, bringing her wonderful food, making her laugh…becoming her friends. She adored them. They gave Mom her ‘Hood name ‘Heavy D’, and she loved it. It stuck.

Wayne cooks Southern food like nobody’s business (Paula Dean is one of his cooking idols) and decorates beautifully (his Christmas decorations were featured in a magazine a couple of years ago). We call him Martha Stewart when he does something particularly creative. Their home is an amazing place, artfully filled with treasures that they have found at yard sales and on the side of the road and repurposed, along with the heady aromas of Wayne’s cooking and lots of laughter. My mother loved nothing better than slowly walking through their house and exclaiming at all of the interesting things…that and Wayne’s Apple Crumb Cake. 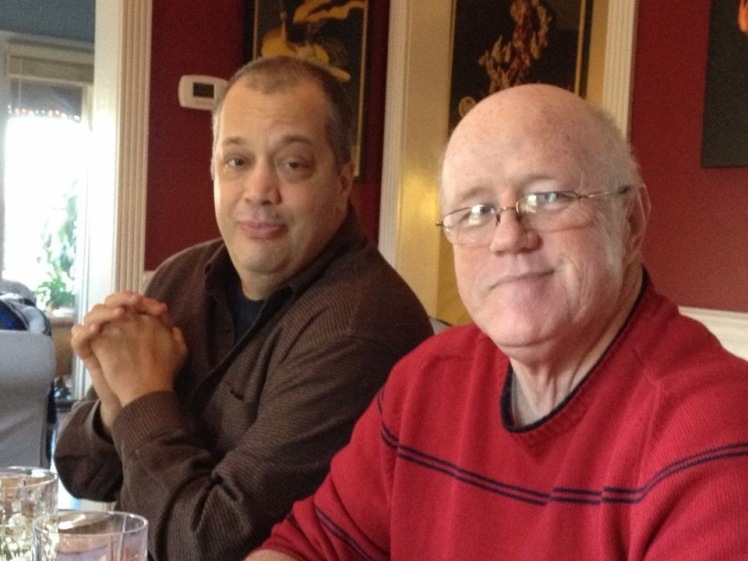 Wayne and John began inviting us to holiday gatherings, and we did the same with them. We looked after each others’ animals, took each other to doctor’s appointments, laughed together, cried together, supported each other through life’s ups and downs. John and Mom watched Dancing with the Stars together over the phone, gossiping about the stars and the goings on at the Home for Wayward Seniors.  I always loved that my ninety-two year old mother from the Deep South in the last few years of her life came to love and be shown the greatest kindness by gay people and African Americans. What a beautiful thing when hearts and minds open wide.

So now my friend John is gone, joining Heavy D in Heaven. As John was such a huge animal lover and a gay man, I couldn’t help but think of the Rainbow Bridge where the animals gather to wait for us. I can see John, healthy and strong, walking over that colorful bridge, surrounded by all of the animals he has helped. Heavy D is there, handing him a chocolate shake, and he is teasing her mercilessly as she giggles.

Hurry up, Dorothy- we’re going to be late for the season finale of Dancing with the Stars! Don’t forget your possum stew…

Oh, John, you are bein’ scrubby again! Who do you think will win?

I can hear the laughter, my heart lightening a bit from its heavy sorrow to think of Mom being there to take care of John as he learns the ropes. I just hope he knows how much he was loved by so many, and that we will look after his Wayne until they can be together again.

I have created a GoFundMe page, ‘Little John, Big Heart’ to help Wayne with the costs associated with John’s final arrangements, medical bills, and lost wages from his time taking care of John. If you are so moved, please consider donating or just sharing the page. Thank you for considering.

5 thoughts on “A Different Rainbow Bridge”