Yesterday life threw a curveball at us, and we are hurting. Big time. It started out as an absolutely beautiful day- a welcome break from the incessant rain we’ve had and a day full of potential.  It began with laughter and joy as we woke up and greeted the dogs  in bed as we always do…

​​
I decided to take the girls for a walk first thing, and they were excited as I fastened them into their harnesses and we headed out into the ‘hood on this gorgeous day. As always, the dogs were energetic and happy as we walked, but when we turned down one of the side streets on our path, I noticed that Coops just stopped- rare for her. I gave her a moment to rest, but was concerned, as the temperatures were very comfortable and this was only fifteen minutes into our usual fifty minute to one hour walk.

You want to go home, Coops?  She wouldn’t make eye contact with me and began panting, sitting, then collapsing on the sidewalk, her breathing becoming more erratic and her eyes far away. I sat down next to her and immediately called Dan…no answer. There was no way I could carry fifty-five pound Coops and get Sophie home, too. I left a panicked voicemail and tried our friend Wayne…no answer. I tried my friend Brian, but he was already in New York. My mind raced- who else would be close by and could help me? I began to truly panic- this was serious- my dog was clearly dying.

Sophie softly whimpered next to Cooper, as I tried Dan again and again, leaving more and more distraught messages (I didn’t know that he was trying to call me at the same time). A call came through from him and I accidentally cut him off in a horrible comedy of errors, my whole body shaking. Everything seemed to be moving in slow motion, except for Cooper’s condition as it rapidly declined. Dan and I finally connected, and he raced over to find us and pick us up. I lifted Coops’ limp body off of the sidewalk and gently put her on the back seat. 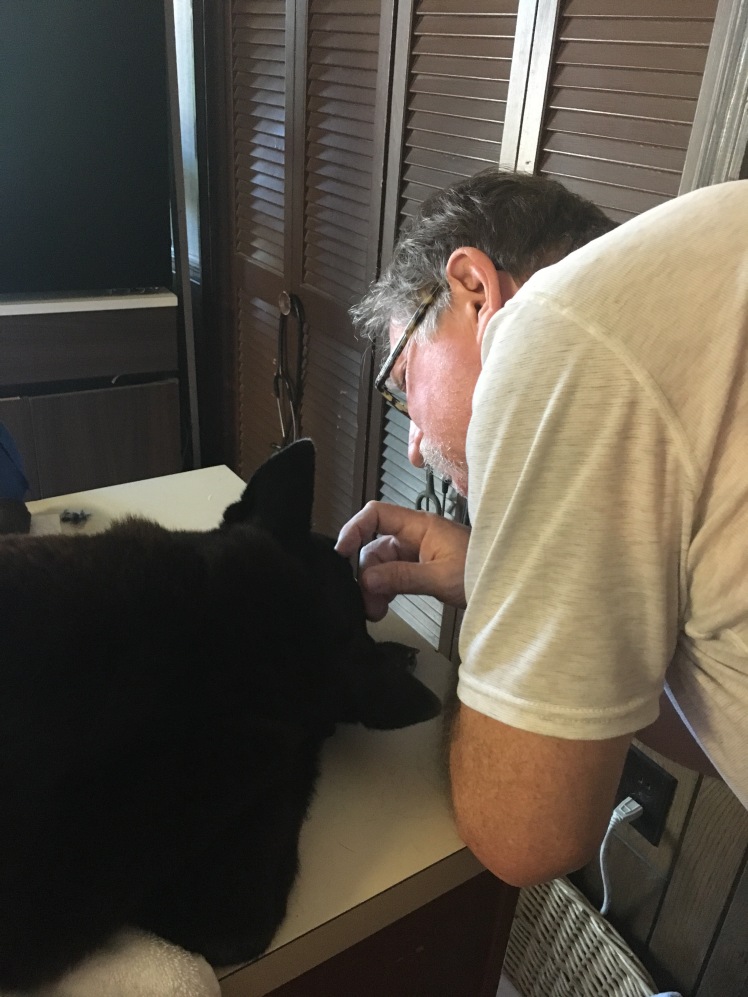 ​
We dropped Sophie off in our yard and raced to the vet’s. Just a few weeks ago they had saved Coops from pancreatitis, and I never dreamed we’d be back again so soon, especially for another emergency. She lay on the examination table panting, her breathing becoming more shallow. I kissed her head and she felt ice cold to the touch. The vet said she had gone into shock and immediately put her on fluids to try to stabilize her before examining her and running tests. Dan and I took turns talking to her and stroking her, telling her we loved her.

An ultrasound showed what the vet had feared- a lot of fluid in her lungs and abdomen. She thought it may be a bleeding tumor on the spleen- common in older dogs of Coops’ breeds (lab, shepherd, Akita), and if so, we could take her to the surgical center for exploratory surgery and have it removed. She cautioned us it could also be multiple tumors, and if so, the prognosis was not good. She sent us out as they did X-rays, and we waited in shock for the results.

The wonderful and compassionate young vet came to get us, and I could tell the news was not good. She showed us the X-ray; there was a large mass in Coops’ liver, pushing her intestines out of their normal place. The fluid she had pulled was blood. She went over the options- getting her in for exploratory surgery that would be very hard on Cooper and most likely would not have good results. She could live without her spleen, but not without her liver. Dan looked at me and then turned to the vet, “If this were your dog, what would you do?” She looked down and shook her head sadly. Dan asked if our longtime vet, Dr. Claytor, who had treated Coops since she was a tiny puppy, could come in just to confirm. Dr. Claytor agreed with the diagnosis, saying the most compassionate thing was to let her go. She hugged us, “She is such a great dog- I’m so sorry.” 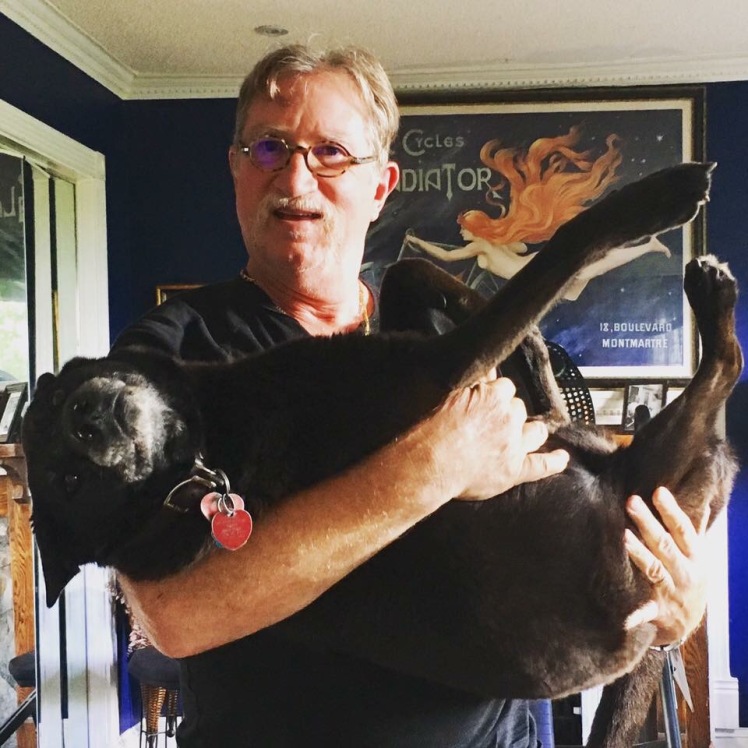 It was surreal- just over an hour before, Coops was her usual happy, goofy self, and now she lay on a table waiting for us to say a painful, final goodbye. The vets left us to be alone with her for a few minutes. We kissed her and stroked her, thanking her for being such a great dog, telling her that she wouldn’t hurt for much longer, and that we loved her so very much.

She began to breathe very erratically, and Dan went to get the vet. Less than two months after we faced the same situation with our precious cat, Kasey, it was time to let Cooper go. I sobbed and Dan cried, too.  In a brief moment of lucidity, Coops lifted her head and turned to look at us, thumping her tail a couple of times. Dan said she was telling us it was okay and that she knew we were with her. I felt my heart break.

We stroked her as the ‘feel good’ shot was given. I layed my head on her chest, feeling her soft fur, stroking her. Moments later, my Coops, our lion hearted protector, the only dog I have ever raised from a puppy, was gone. 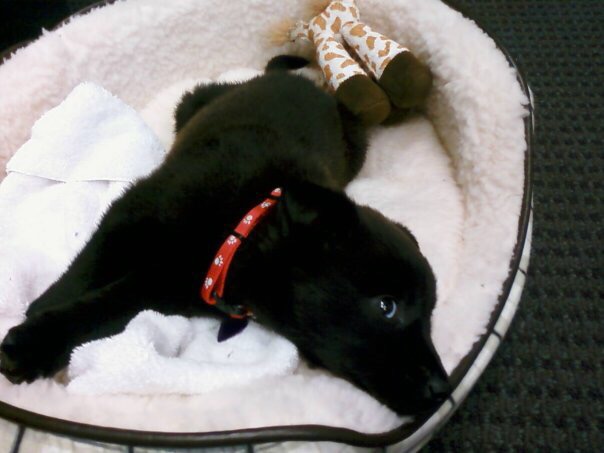 My gift from the alley, she had been dumped off during a terrible storm, tornado sirens wailing. She ran in front of my car as I was heading to check on Mom and Sophie before a recital. I had almost gone the other way, but for some reason had turned left instead of right down the alley. I had to stop, had to see what tiny black animal it was. I found her shivering in the bushes and scooped her up. How grateful I am that something told me to head down that direction; what a gift she has been for over nine years. We did our very  best to give her a great life, and she returned the favor with fierce loyalty, companionship, and unconditional love. 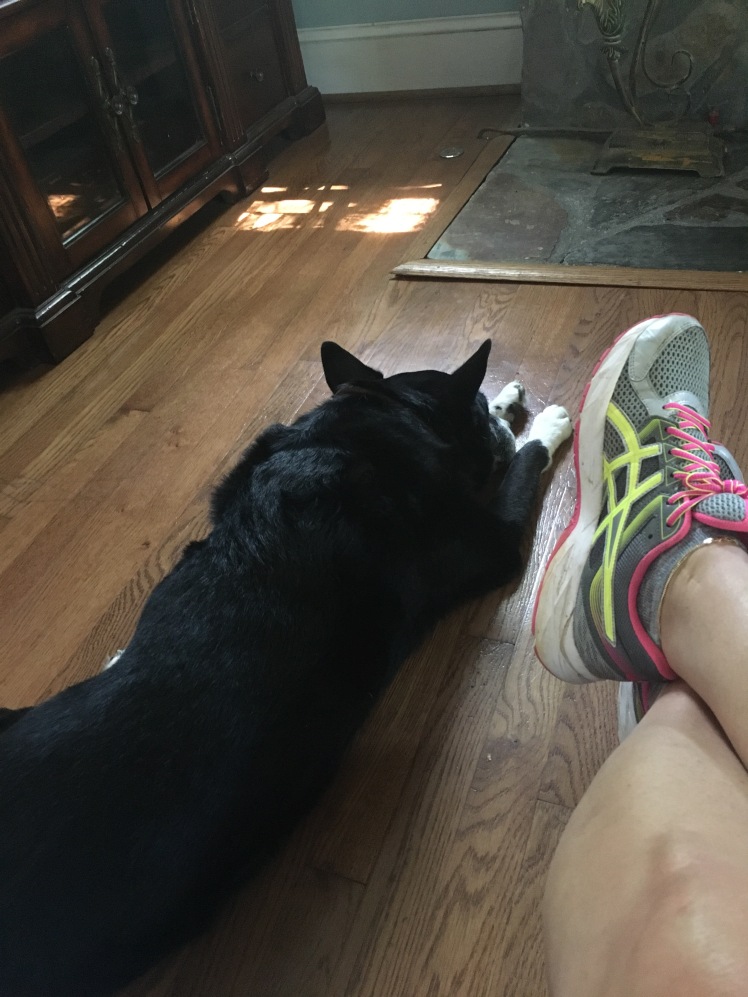 Sophie, staying glued to me even more than usual. So thankful that we have her.

Our house feels so quiet and empty without her larger than life presence. She was very much the alpha dog, and Sophie seems lost without her buddy. I woke up crying in the middle of the night, missing the comforting weight of her sleeping on my feet, hogging the bed as she always did. I have never lost an animal without time to at least wrap my head around it all, and I can tell that this will be an especially difficult loss for Dan and I to navigate. We were so grateful that we were able to get her to the vet in time to get fluids into her- that at least made her more comfortable and aware that we were with her. I’m grateful that she didn’t die alone at home or on that sidewalk, but instead, hearing our words of love and feeling our touch.  She deserved that; she was truly a great dog. 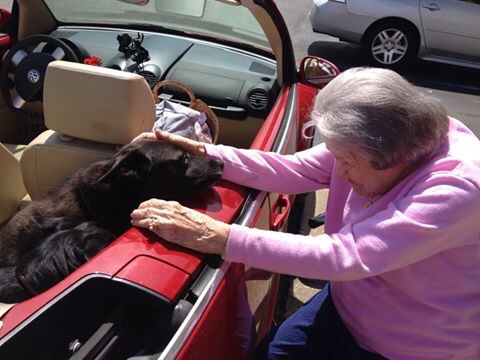 Now, I will imagine Cooper with her beloved ‘Grandma’, with Mom giving her the before-forbidden Goldfish and tater tots- and probably a bit of chocolate shake, too. After all, there are no forbidden foods in Heaven.  Coops will be one happy dog. 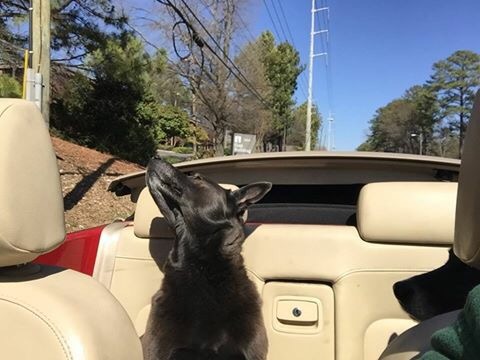 22 thoughts on “Lion Heart: Finding Gratitude in the Curveballs”