This one…this one is in trouble. We spent a beautiful afternoon working out in the yard trying to get a lot done before the next storm system headed our way, and Sophie lay down wherever I was and watched me as she always does, ever keeping me in her line of vision. It was a good ol’ hot, buggy, and muggy Alabama day, but it felt wonderful to be working outside in the sunshine. Toward the end of the day, I swept down the thirty-four stairs to the street, and when I looked up, there was no Sophie at the top of the steps where she had been just minutes before. Strange…

I searched our whole yard and decks, still no Sophie. Then I saw something that made my stomach drop; the side gate was open just a few feet from where she had been camped out. I panicked as Dan came in through the gate, having gone out to check on the progress of the construction going on next door.

Have you seen Sophie?!

Dan’s eyes widened in dawning fear. We’d just been talking about how grateful we were that we had Sophie to help us heal from losing Cooper, how important she was to us, how much we loved her. We began a frantic search, realizing that Dan must have looked away just long enough for Sophie to slip out, something she has never done in all these years. While Sophie is microchipped and had her collar and tag with contact information, we are still living in Southside- anything could happen. She is also a heading-toward-eleven-year-old sweet dog with maybe a tad of dementia who probably would happily go with anyone…and, to top it all off,  a storm was forecast for this evening (which was rapidly approaching) and people have been shooting off fireworks in anticipation of the Fourth. Sophie is terrified of fireworks, and I could just see her bolting and getting lost on a dark, stormy night with the boom of fireworks lighting the sky. We had to find her, and fast. She is precious to us, and in all honesty, my heart just couldn’t take another blow so close on the heels of losing Cooper and Kasey and our dear friend John this summer.

We have no doubt that she went to search for Cooper, the only explanation for this wildly out-of-character behavior four days after we lost Coops, the dog who had been Sophie’s constant companion for over nine  years. I called our neighbor down the hill from us to ask if she would keep an eye out, and Dan and I started canvassing the alley and all around, calling for her loudly and shaking the treat jar. So many emotions were coursing through my body; panic, fear, disbelief that we could possibly lose Sophie after just going through the loss of two other cherished pets in two months. No! I also felt helpless, a feeling that I absolutely despise. Where was she?

We decided that one of us needed to drive around the neighborhood to cast a wider net  in our search while the other stayed on foot. Just as Dan was heading out in his car down the alley, our neighbor called- her husband Hank had Sophie at our front gate!  I frantically waved for Dan to come back, and I was so relieved I honestly thought I would faint.

Sophie was happy as a clam, tongue hanging out and panting after her big adventure- totally clueless as to the drama and emotional turmoil she had caused by her little excursion. I immediately put her inside- after loving on her and giving her one of the treats from the treat jar I’d been shaking like morracas on Cinco de Mayo.

Our neighbor called to check and make sure everything was okay. When I asked her where they’d found Sophie, she told me, “Oh, she was sitting right in front of your front gate, waiting to come up the stairs!” This, as Dan and I were yelling her name back in the alley behind our house for what felt like forever. At least she knew to come home- just not back to the open gate where she’d made her escape- that would make too much sense. That’s okay- so much better than her exploring our wacky neighborhood as evening approached- an evening that would be filled with fireworks and possible storms. I would have just died a thousand deaths had she not been found. 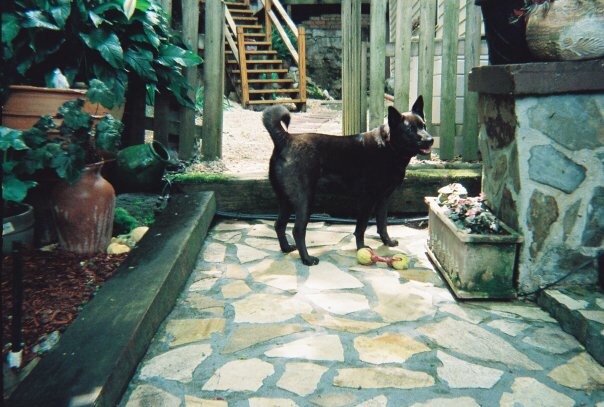 One of my friends said that she must have been channeling Coops as she slipped out the gate When Cooper was a a very young dog, she discovered a way to slip out of our property, run down the long street to her beloved Grandma’s house, and then slip back into our yard without detection. We assured several friends who had spotted her on multiple occasions that it couldn’t be Coops- she was in the yard with us! That is, until I came home from work to see her wriggling back into our yard underneath the back fence. (Which is how she earned a certain nickname…see below.) Mr. MacKenzie and his trusty chicken wire put an end to that foolishness in no time, and there were no more prison breaks for Ms. Coops- she had to wait an go see Grandma the traditional way. That she left the yard was one thing, but to come back without us even noticing she’d been gone? That beastie was too smart for her own good.

‘Plumb wore out’ as we say in the South…

Sophie is sleeping soundly next to us on the sunporch floor, having now officially taken on the mantle of Coops’ infamous nickname, ‘Little Sh*t’ (see above, and ‘pardon my French’). We are incredibly grateful that ‘Sophie’s Most Excellent Adventure’ had a happy ending thanks to wonderful and caring neighbors (bless you, Martha and Hank!!). Dan has promised no more open gates (he felt absolutely horrible), and I am in need of a sedative. A strong one. As Mom would say in her Tennessee drawl, “They Lord God…”

8 thoughts on “Sophie’s Most Excellent Adventure”