Shiva has now been in our home for two weeks and two days, during which time we have been educated in something called Tortitude. ‘Tortitude’ is the special attitude that Tortoiseshell cats have- a way to describe their distinctive, umm…how shall I say…cray cray. It’s a real thing; Dan found a website dedicated to Tortie owners, and as I read their comments, the gravity of what we were in for began to sink in. This was no normal cat, no gentle, purring lap kitty. I had brought the feline equivalent of Satan into our home. 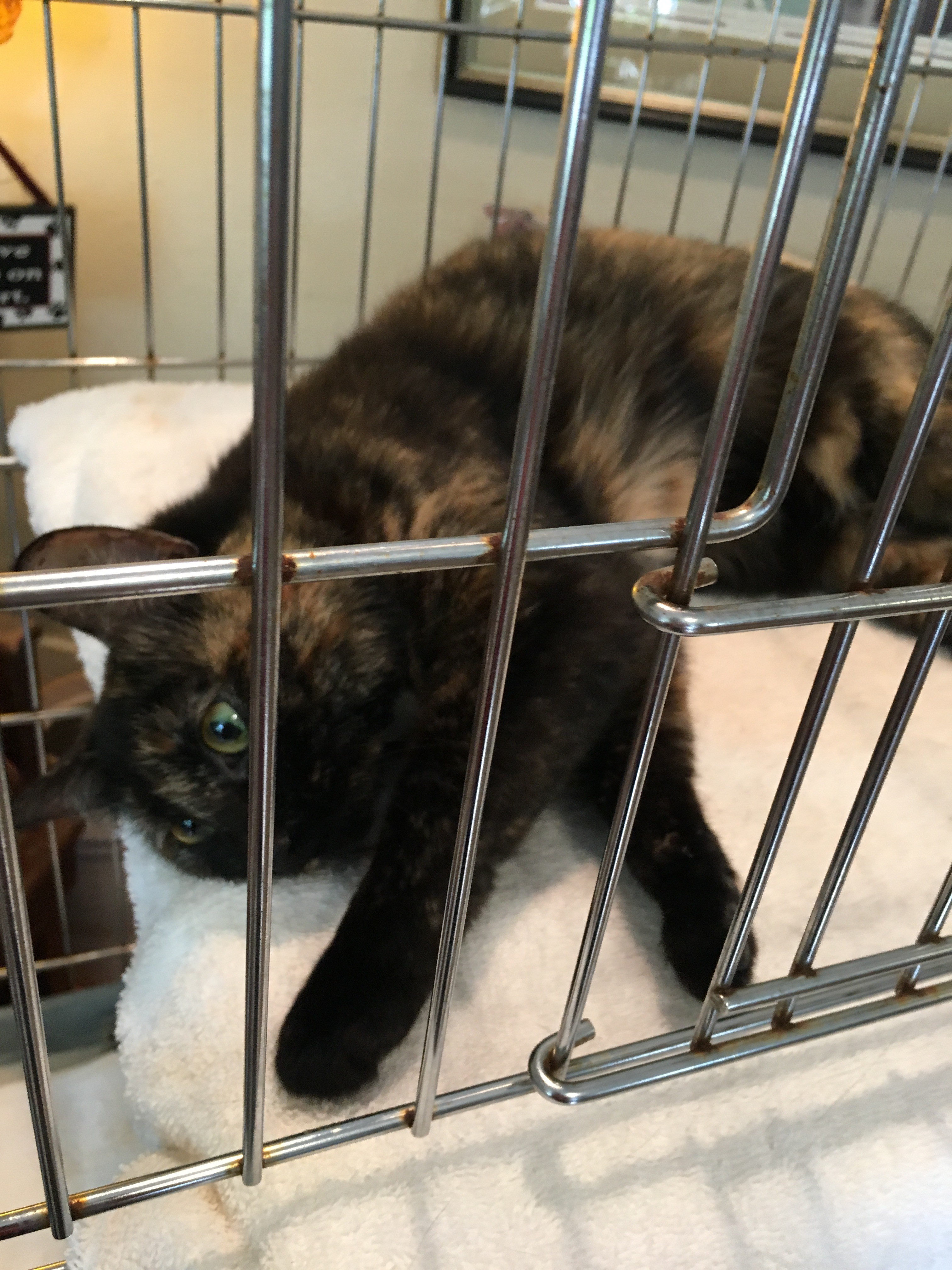 She was so sweet at the vet’s when I saw her in that cage and she gently reached out and grasped my finger, eyes wide and pleading; Save me! Once I got her home? Well, her true personality began to emerge. She is fearless, staring poor bewildered Sophie down, daring our gentle and timid senior dog to make a move toward her. Sophie may need therapy after all of this; right now she stays glued to me side at all times, looking at me as if to say, “Mom, what evil have you brought into our home?” Come to think of it, I may need therapy, too, when it’s all said and done.

During the day she sleeps like the dead, resting up for the nocturnal fun to come. Maybe she’s part vampire. She thunders through the house, going up and down the stairs at the speed of light, chattering in her high-pitched chirping voice, eyes wild and tail twitching. We have learned to stay out of the way until she burns off at least some of the crazy. Yesterday, I found her head-first in the toilet, drinking- her filtered water downstairs be damned. The other night we watched her as she mounted the bannister and proceeded to slide down. It was hysterical- perhaps the funniest thing I have ever seen. Sadly, what would have become a viral video sensation was only a snapshot, as in my haste I failed to set my phone to video. Damn. She is everywhere, on everything.

Dan says she is two pounds of terror, six pounds of sweetness…I’m thinking that ratio is off a tad. She truly is sweet sometimes, most especially at 3am, when she sits on my chest, purring and kneading, with her nails going in and out of a very sensitive part of my anatomy. Once we get up in the morning, she runs from me like I am an axe murderer. Then she follows Sophie and I around, flirting but out of reach except for the occasional rub against my leg. I bought a pheromone collar for her that was supposed to mellow her out- she smells wonderfully herbal, but laughed at the idea of anything dampening her esprit de corps. 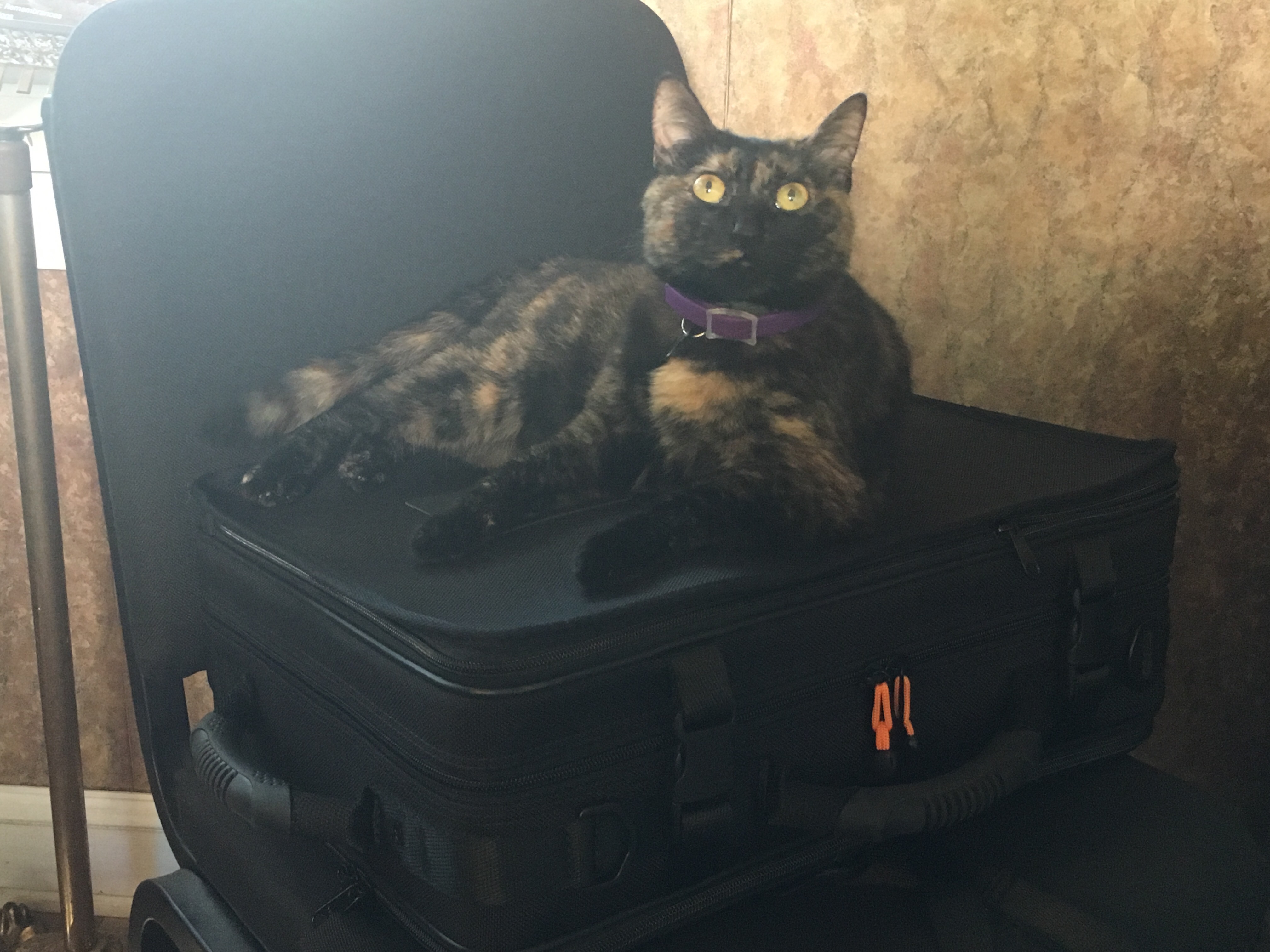 I’m trying to practice, cat…get off of my clarinets!

Well, at least she got off of my clarinets…but where do I sit now?

The biggest thing I have learned about Shiva is that everything has to be her idea- everything. If she is in the mood for affection, she is incredibly loving; if not, you may come back with a nub for a hand.

If you deny her something she wants, she yowls and gives you the look of death. I misread her two nights ago, reaching down to pick her up for a brief cuddle…she swiped at me, told me off soundly, and ran away. I let her go; I tried to fly too close to the sun. Five hours later in bed, I was her favorite human again, her purring loud and strong. I get whiplash at her changing moods. 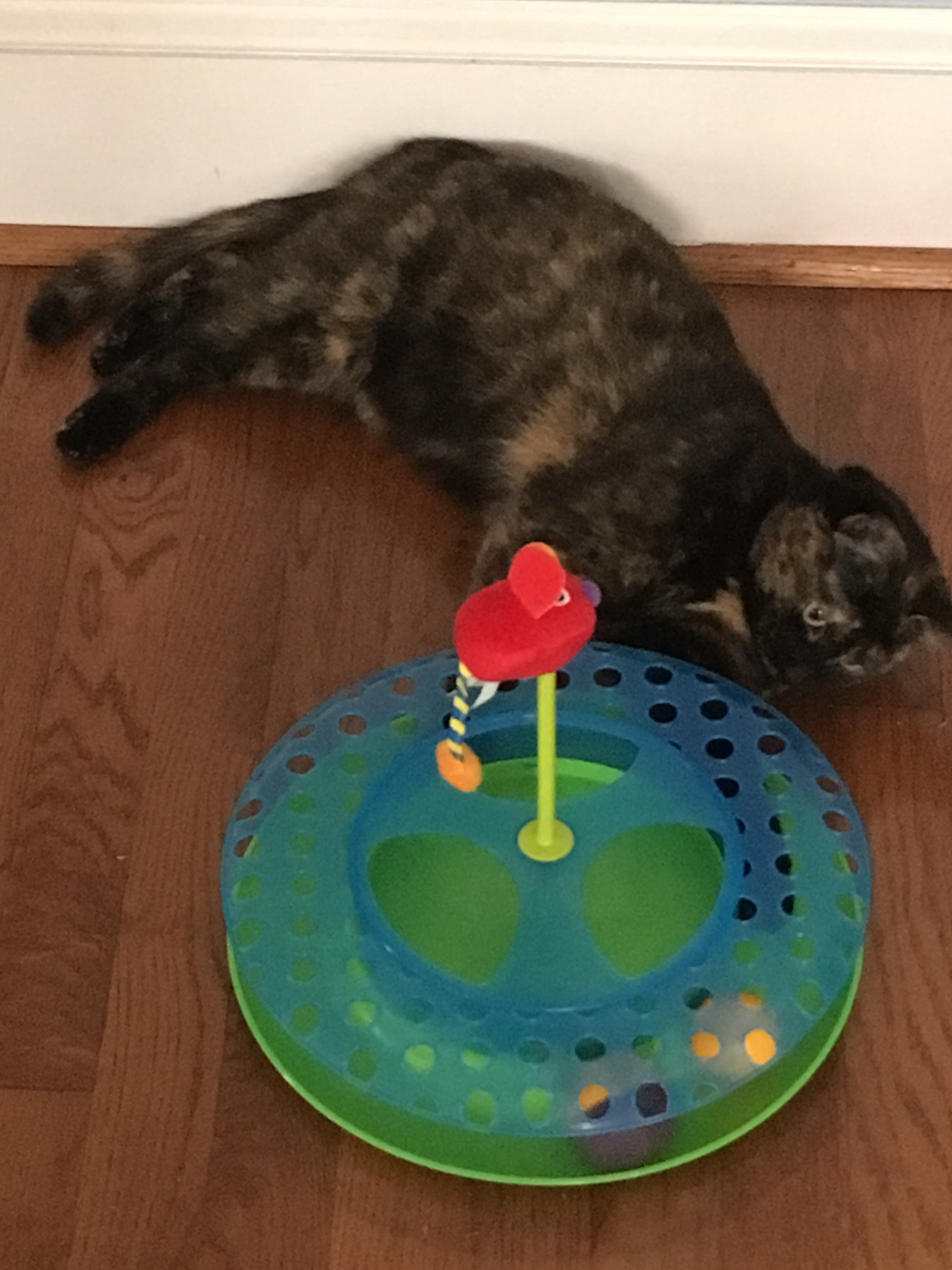 I have bought her every cat toy known to Man in an effort to wear her out. So far, nothing works; she has more energy than a roomful of kindergarteners on a sugar high. The positives? Shiva has brought much-needed laughter into our home after a summer of loss and challenge. She fascinates me as I try to learn her moods, her body language, in a desperate effort of self-preservation. I have a feeling that this eight pounds of fluffy terror is going to teach me many lessons…and I’m hoping I survive them.

For now we will pray that she mellows a bit in time. She is two years old, maybe by the time she’s- I don’t know- maybe ten? Maybe then she’ll slow down some. That’s only eight years from now. Eight years. We can make it, right? Hello? Anyone?

9 thoughts on “The Shiva Chronicles: Flying too Close to the Sun”