Sometimes she looks so sweet, so gentle, so cuddly…and then I see the gleam in her eyes, the cold, calculating look of ruthless intelligence and determination, and I remember the reality; Shiva is plotting my demise so that she can have Dan all to herself. I’m pretty confident that Sophie is on the hit list, too. “Oh, how could you say something like that?” you ask…well, let me ‘splain. 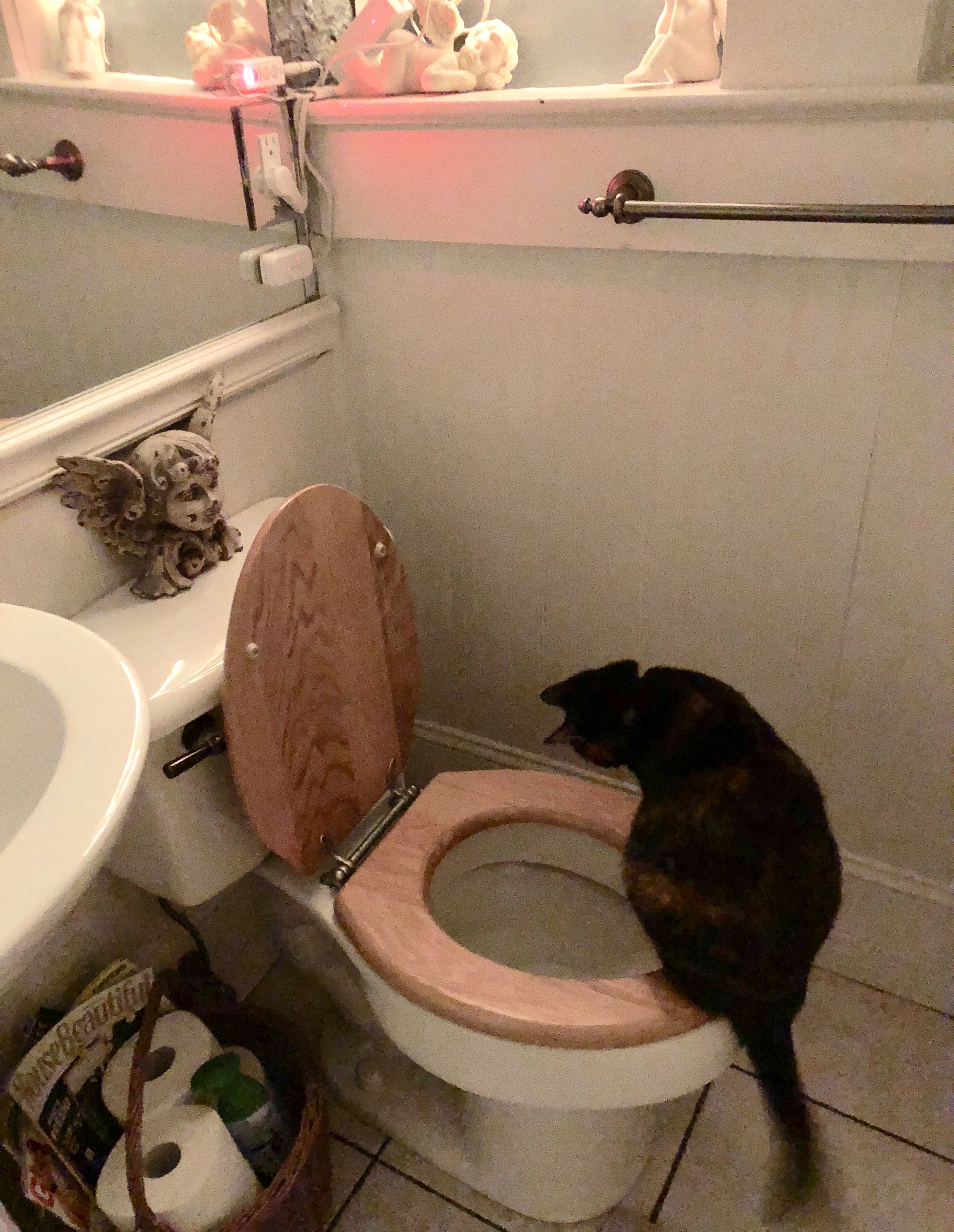 Fascinated with swirling water or contemplating some sort of mayhem?

After watching Shiva surprise Sophie with a bap on the backside as she darts past and chase her up the stairs each night at bedtime, I was heartened to see them sleeping together peacefully in our bed…or at least I hoped it is was peacefully. I did check to make sure that Sophie was still breathing.

Then I saw Shiva’s face as she stared at Sophie a few minutes later:

Sleeping with the enemy… 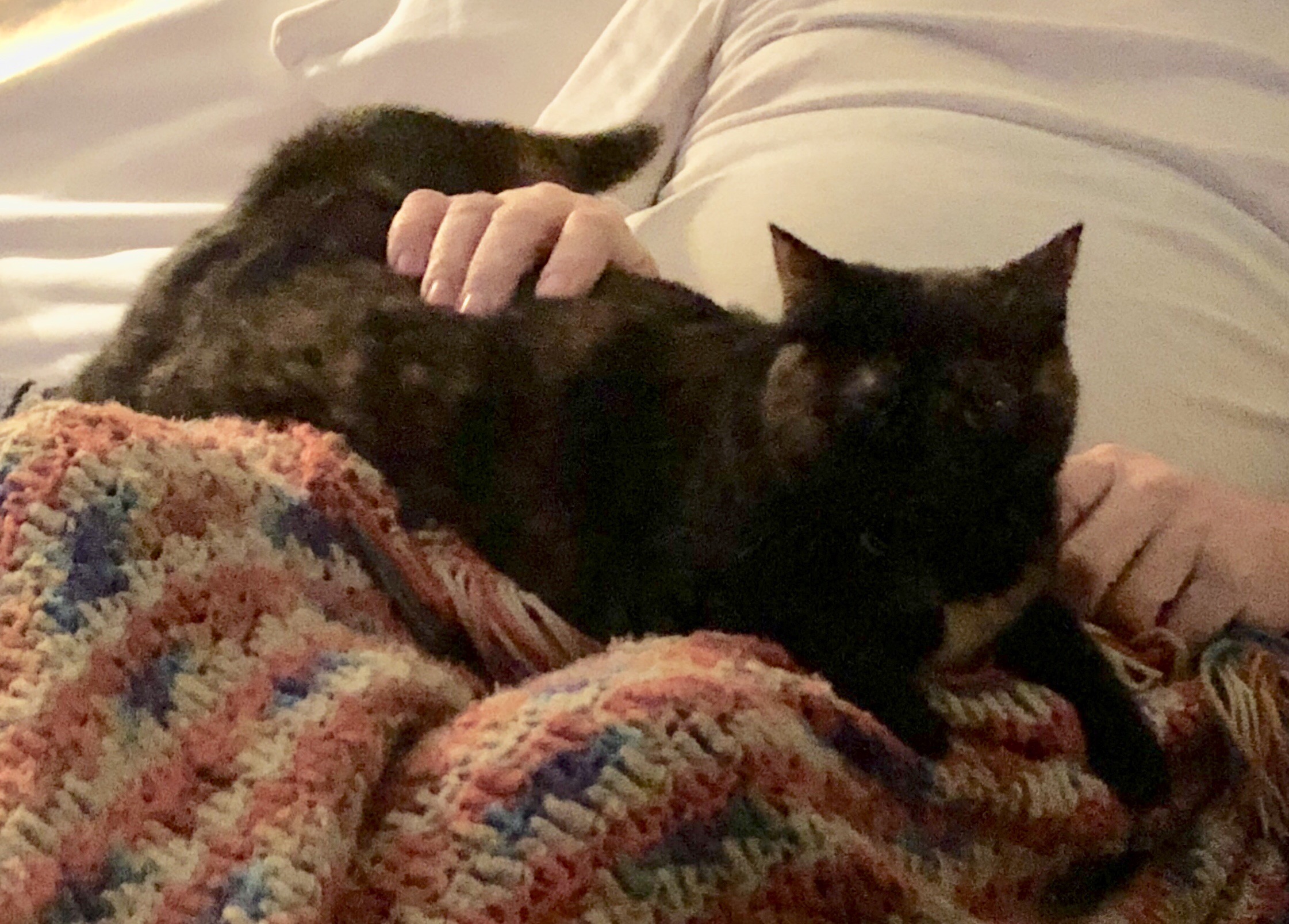 In the evenings, Shiva coyly flirts with Dan, jumping on his lap as he strokes her. She looks at me during all of this as if to say, “Soon, soon he will be all mine!” I told Dan that if I dared to touch her like that, I’d come back looking like the star of a slasher movie. I’ll pass, thank you- that is unless it is the middle of the night when she either, a) likes me briefly in some sort of weird Brigadoon happening, or b) endures my touch as she uses my chest as a conduit to the bedroom window by my side of the bed. I guess I should be grateful for small mercies where our Tortie is concerned. 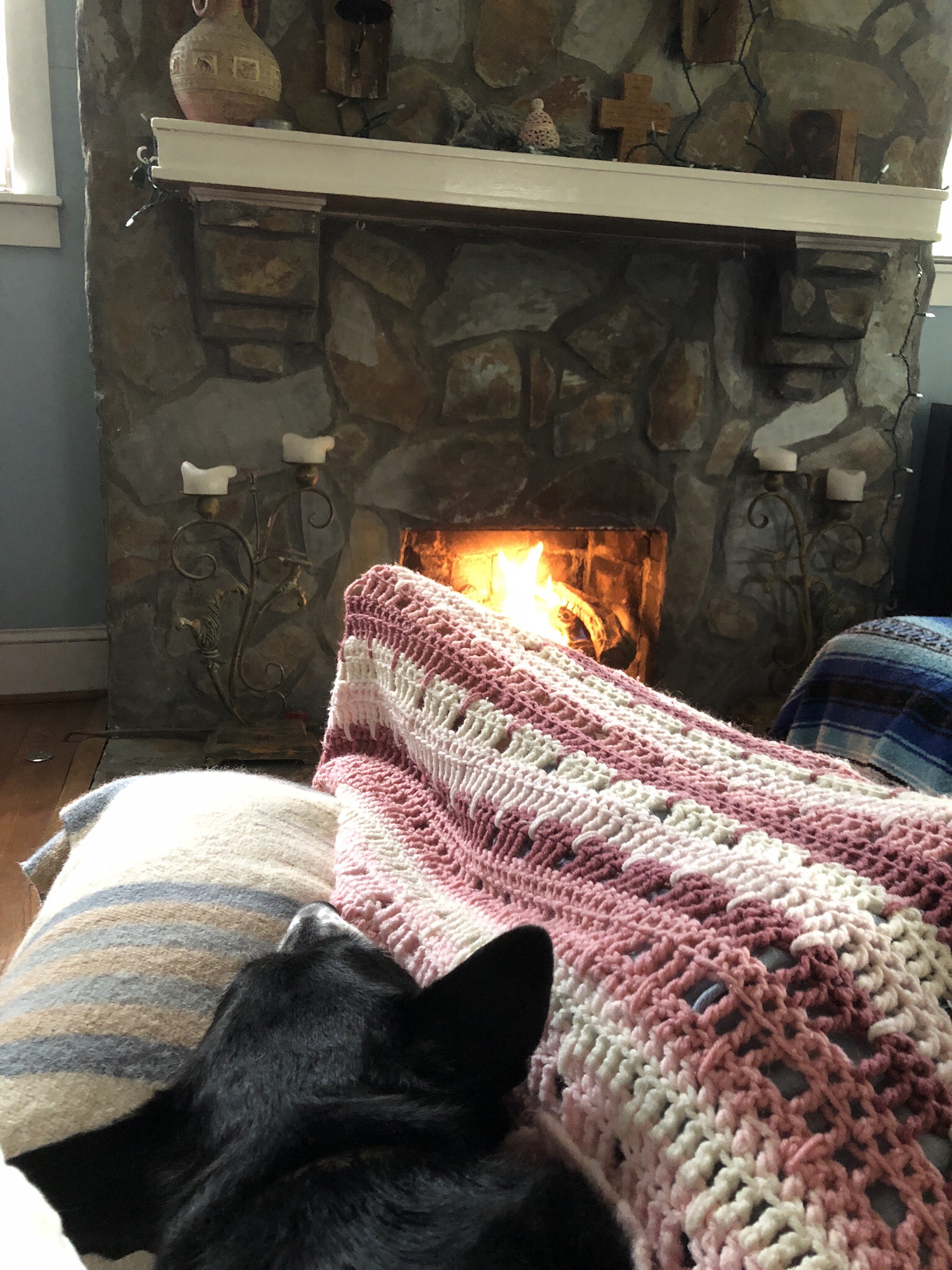 Sophie stays glued to my side…there is safety in numbers. We pray.

Today I came home from work and went to feed Sophie. Shiva followed us into the ‘dog room’ (now dog/cat room, aka, Shiva’s room), and ran into the dog crate- her new favorite place- and began talking to me loudly. This is her demand for treats to be put into the crate. She has us trained quite well, I’m afraid. I thought for sure that my peace offering would soften her a bit, so I decided to push my luck; as she walked into the dining room a few minutes later, I picked her up for a quick ‘snuggle’…not the right word- more like a drive-by holding. As soon as I did so, she gave her warning yowl and turned to look at me like I was Jeffrey Dahmer. I patted her head and quickly put her down. I also considered going into the Witness Protection Program. Shiva is a demon seed.

I’m not sure how much time Sophie and I have left before Shiva realizes her evil master plan. Dan laughs when I try to tell him what is about to happen, completely fooled, Shiva innocently sitting in his lap while narrowing her eyes at me in warning. I’m resigned to my fate. All I ask- if…or when…the worst should happen, tell my story.

6 thoughts on “The Shiva Chronicles: Upon Which Shiva Plots my Demise”