I am back in Lincoln for the week after spending much of last week here with my BFF, rehearsing for our Amicitia Duo CD project that begins today, Play Pretty, named in honor of Diane’s sweet mother who passed away last year, as well as for the first movement of a piece written for us by our friend (and amazing composer), Scott McAllister. 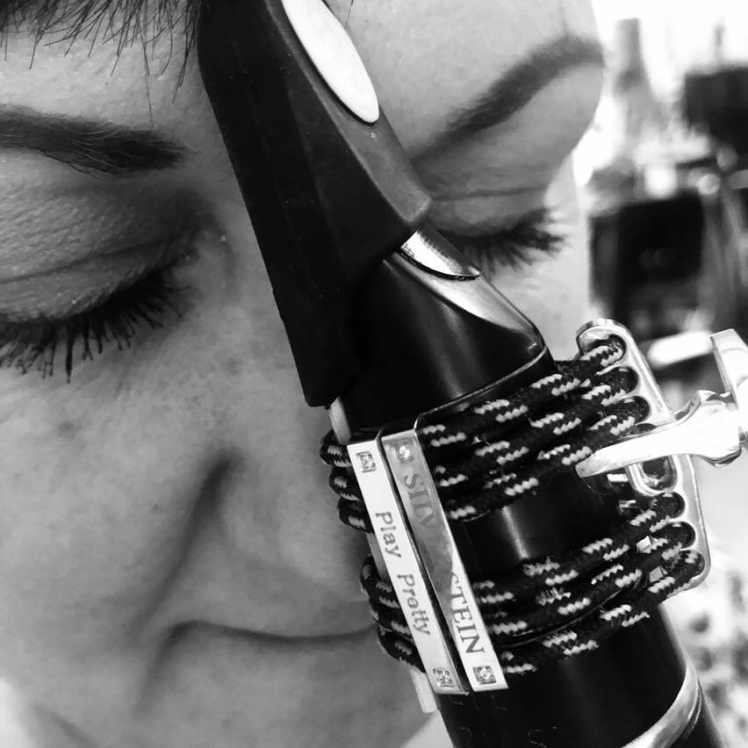 Diane’s Mom always told her to “Play pretty!” before every performance. (Photo by Diane Barger)

The piece Scott wrote is extra special to us, as it was written in honor of our long friendship of over thirty years and also of our relationships with our mothers, now both gone. Sometimes it’s tough to get through our mothers’ movements, as the music brings the tears so close to the surface.  I feel incredibly fortunate to be playing such great and meaningful music with my best friend. 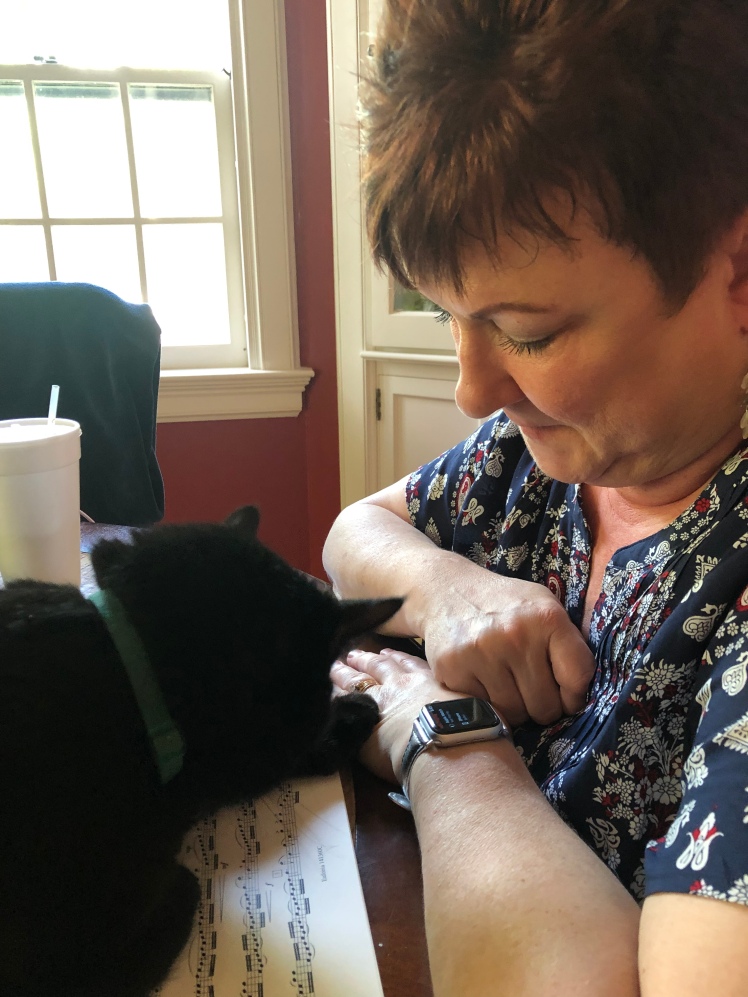 Diane and her amazing cat, Fritz (the perfect cat). Oh, if he could only mentor Shiva for a while…

I am staying in Diane and her husband’s stately and gorgeous home, lovingly called Barger Manor. It is the most lovely time in Lincoln, with everything so green and beautiful flowers blooming everywhere. Such a great city, with amazing restaurants, a top-notch symphony, and the flagship university in the state. 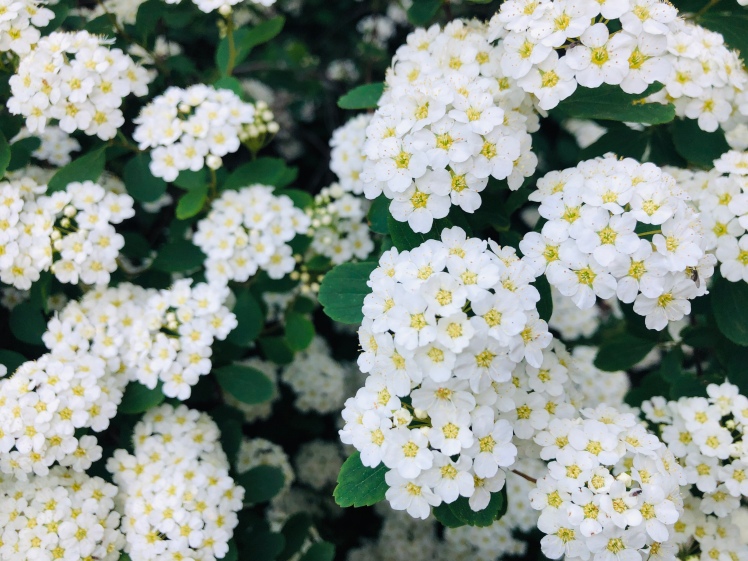 I had to pay my dues at the end of the last trip; I flew United so that I could fly directly into Lincoln, saving Diane from making the long drive to Omaha to pick me up as I was getting in late at night. Going home for a few days to Birmingham should have been easy, but it was anything but that.

After a wonderful breakfast at The Egg and I, Diane dropped me off at the Lincoln airport and I headed to the gate. The first announcement came that our plane had been delayed a half hour, then another followed that there was a ground stop in Chicago (our connecting city) due to weather. It seems Mother Nature was one unhappy lady, and the attendant announced that the flight would now be delayed at least two hours. There were loud moans and protestations from the packed waiting area, and then a long line formed as those of us who were going to miss our connections worked to get home.

The attendant shook his head as he looked at the limited options to get me back to Birmingham, finally rerouting me: Lincoln-Denver-Houston-Birmingham, assuring me that my suitcase would be rerouted, too. I rarely check baggage anymore thanks so too many airline snafus, but chose to this time due to shoulder issues (I’m having surgery a week from tomorrow). I crossed my fingers and began the long journey home that would get me there almost six hours later than planned. 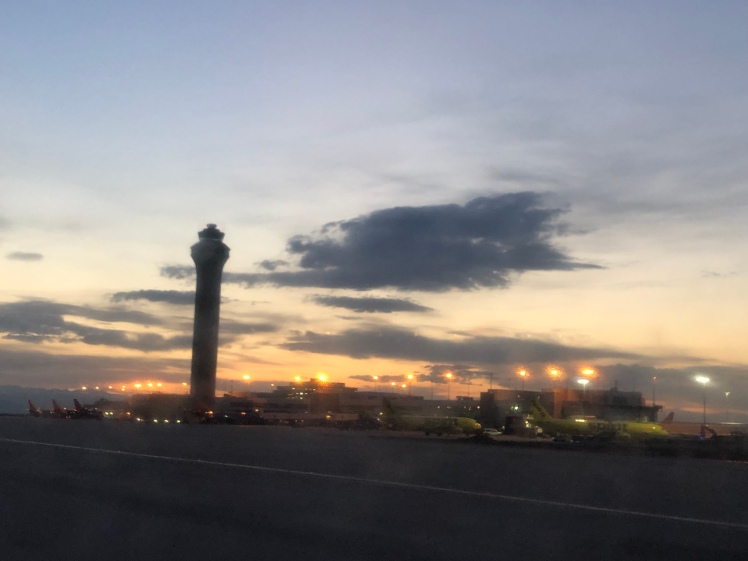 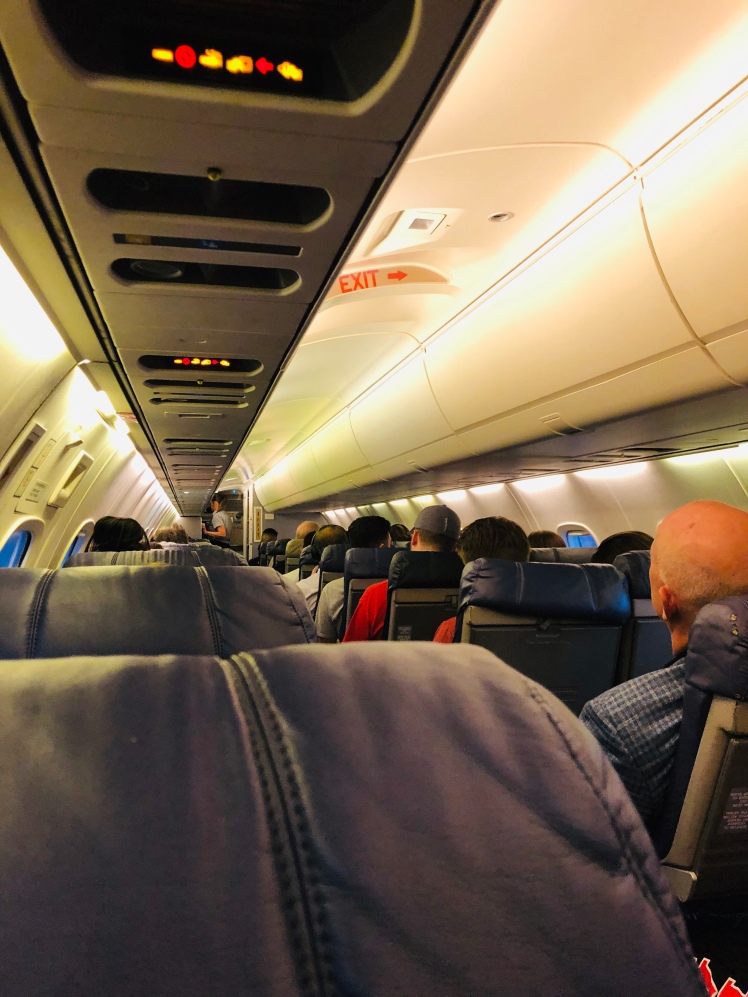 The connections were tight, and I had to run from one plane to the next. I was extra grateful for that big breakfast, as there were few options and no time for food along the way in my mad dash. As my flight to Birmingham boarded, I grabbed a bottle of water and a granola bar; none of it mattered- I was going home to my little family.

We finally touched down in Birmingham after 10pm. When I turned on my phone, an alert came in from United saying that my baggage didn’t make it to Birmingham and would have to be delivered later. Great. I would be traveling again in just a few days, and this news did not bode well. I searched for an attendant to set up delivery of my bag, but no luck, so I wearily decided to deal with it in the morning and went out to meet Dan who’d brought our sweet Marley to greet me.

The next morning I called United, getting a very nice man in India who helped to complete a ‘delayed or missing luggage’ form. He apologized, saying that they did not know where my bag was at this time. Ugh. Thus began a frustrating three days of calls and texts from United, telling me that tracing was still in progress as they still didn’t know where my suitcase was. 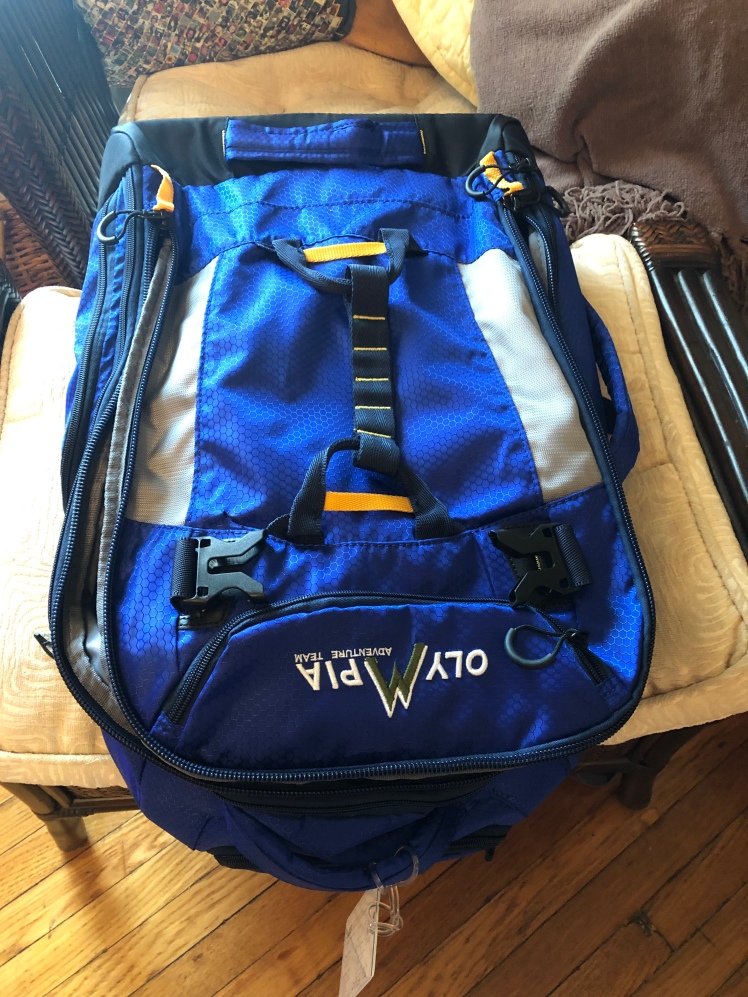 My very kind BFF sent me a gift card for Amazon, and I used it to purchase a new carry-on bag (note: carry-on bag), as I had to fly back to Lincoln in just a few short days. I purchased replacement chargers, hair products, make-up, all the while ruing the day I checked that bag (one that also contained my work calendar and several new pieces of clothing that I’d purchased in Lincoln). At least the date night that Dan had planned for us was moved to Sunday evening. 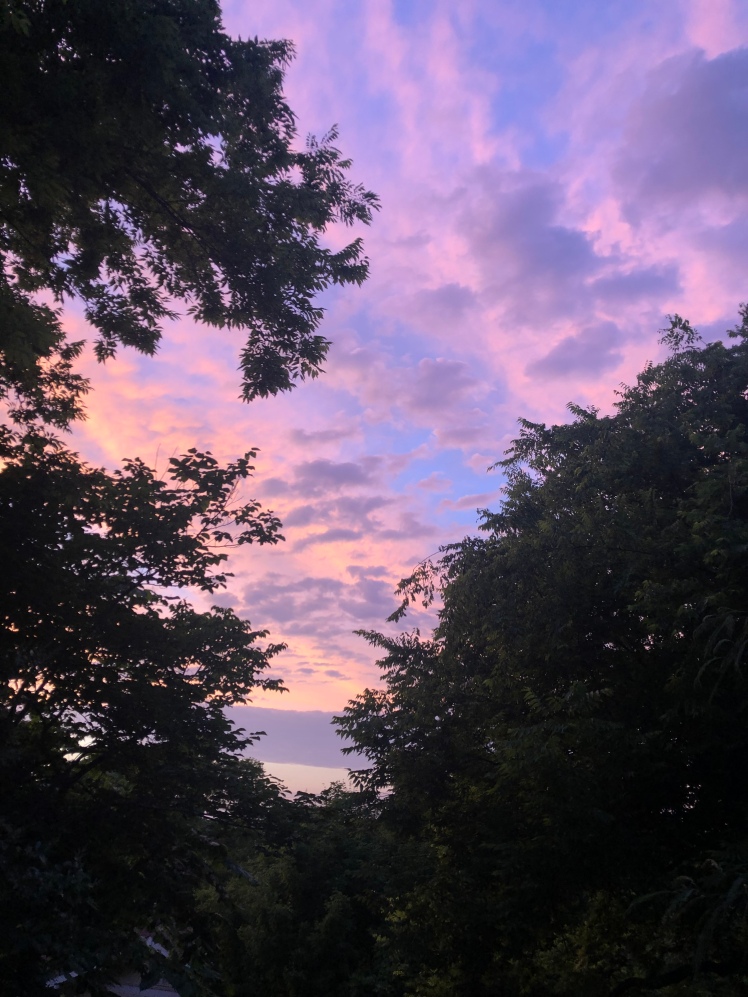 Approximately every twelve hours I received the same text from United, apologizing that my bag had not been located yet. I was fit to be tied; I truly loathe losing things- even if I’m not the one to lose them, especially with another trip looming on the horizon. And then, as I got in the car after picking up a prescription I had a voicemail.

“Hi, this is Salina from the United desk at the Birmingham Airport. I’m just checking because you never claimed your bag in Birmingham and it’s our policy to return it to Houston after three days.”

I immediately called Salina and raced to the airport. I made the young woman laugh as I hugged her and told her that she’d made my day. My errant bag had been sitting at the airport baggage claim office the entire time, even though United said it didn’t make it. The very same bag that had not one but two very clear name tags ugh my contact information, one being my UAB business card that might make one think that I actually lived in Birmingham. I was grateful but gobsmacked that no one had thought to call me in three days- and that United had no clue about my bag’s whereabouts.

The irony? I am still receiving texts from United, apologizing that they still haven’t located my suitcase, even though I wrote to inform them that I indeed had my bag. I think I’ll just wait and see how long it will take them to figure it out. In the meantime, I’ve already flown back to Lincoln, this time on Delta and with a carry-on bag. Lesson learned. 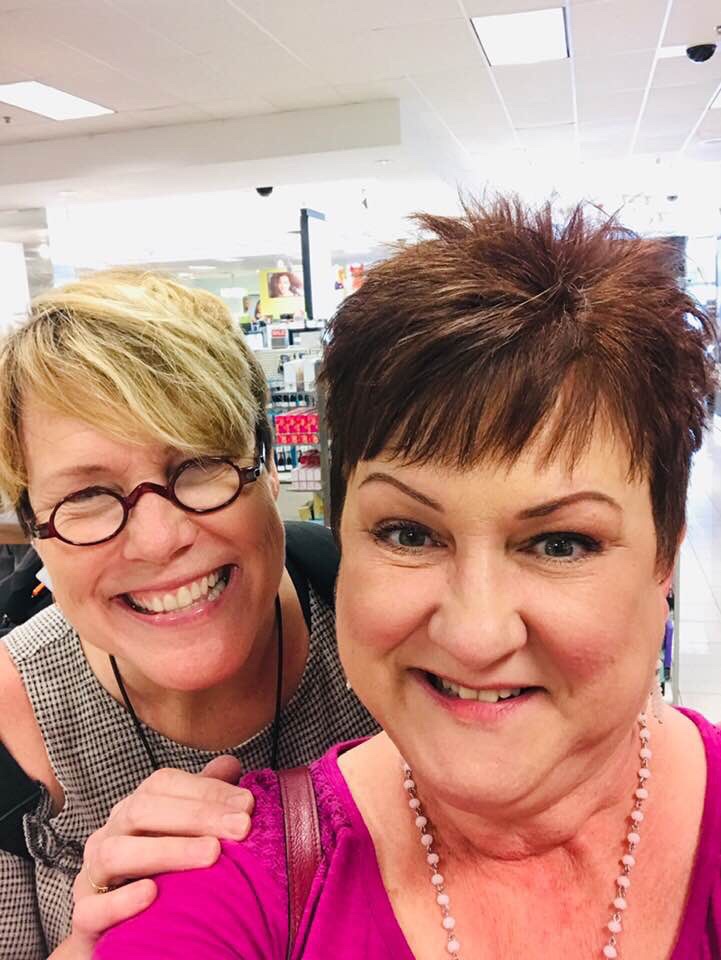 2 thoughts on “On BFFs and WTFs”