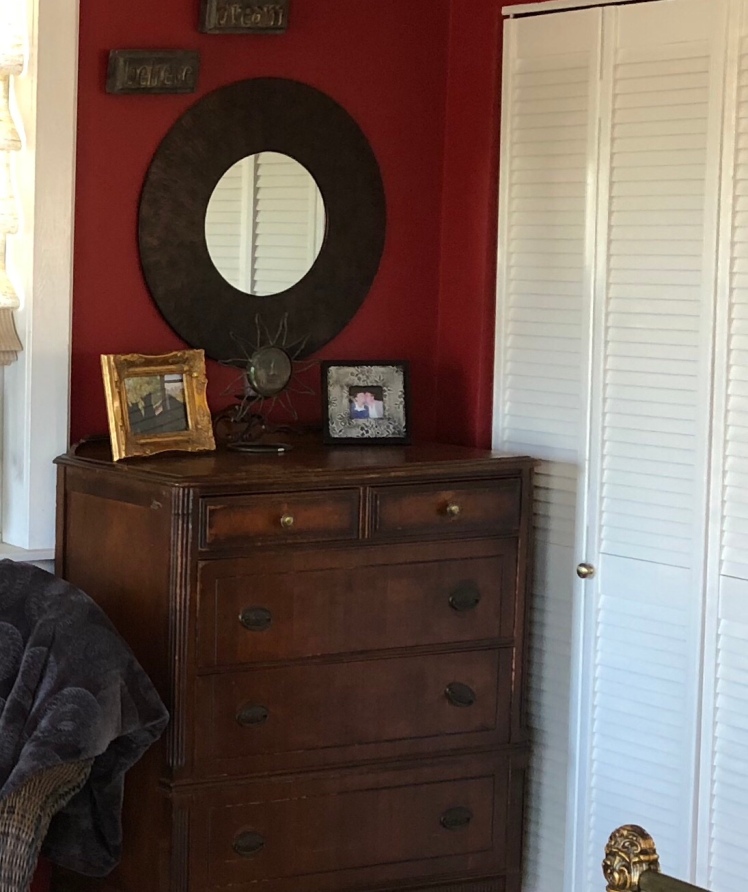 While getting our guesthouse ready for our first AirBnB guests, Dan cleaned out everything that was in the chest of drawers that used to be in Mom’s living room at the Home for Wayward Seniors, putting the boxes in my music studio for me to deal with when I could. I had stored some of her things in the chest that I just wasn’t yet ready to deal with after her death almost four years ago. Where does time go?

I was swamped at school, so the boxes sat untouched for well over a week until last weekend when I walked in my studio to practice and decided it was time to see what treasures the chest had contained.

Shortly before Mom passed, I asked her that if she was able to, to please send me signs that she was okay, to let me know that she was still with me. She promised me that she would, and there have been so many times since she left us that unexplained things happened- so many occurrences that I have no doubt had Mom’s signature touch, that by now I just smile and say, “Hi, Momma!” when they pop up. 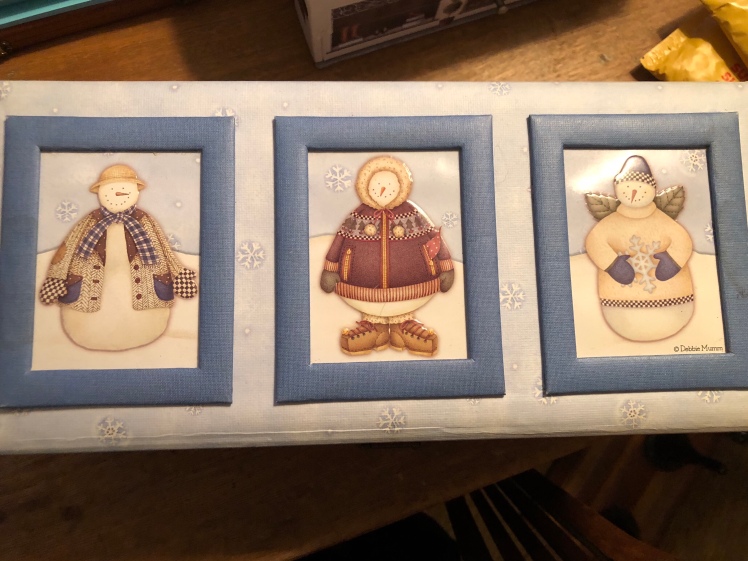 The first thing that caught my eye was the snowman jewelry case, of course. Mom was obsessed with snowmen and kept them out all year long because she said they made her happy. My sister and I do that now, too. 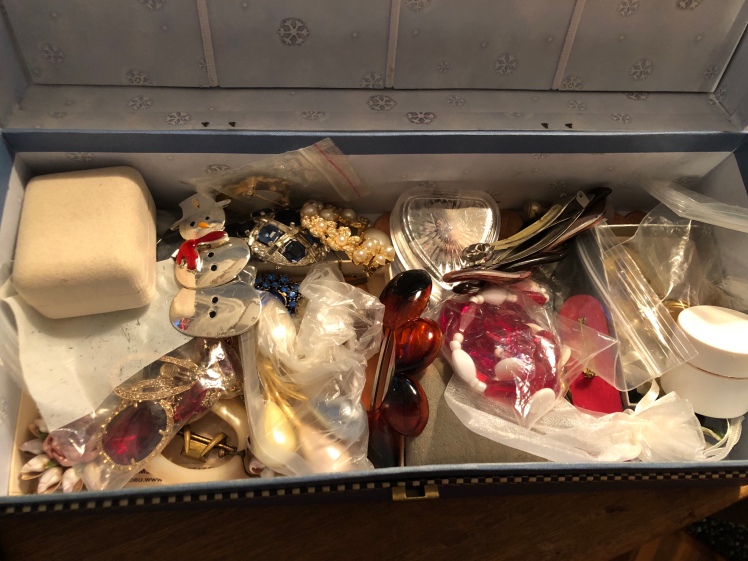 I smiled as I looked through the treasures that so reflected my mother’s spirit; the costume jewelry that she spent hours examining, repairing, and playing with as she sat in her lift chair mixed in with some truly beautiful pieces. Neatly organized pieces in small plastic baggies and larger colorful pieces placed in different sections of the box, everything placed with such care and intention. Family photos in the old cookie tin that I can still see my siblings pouring over and telling stories around the dining room table. Mixed in with the jewelry I found a single strand of her beautiful silver hair, and my heart felt a tug.

I found two lovely necklaces that I pulled out to wear, along with some other small pieces that just spoke to me. My best friend encouraged me to wear a piece from these treasures each day to make my mother feel close. I have been missing her so much lately, and wearing these pieces has made me feel my mother’s love loud and clear. I found a tiny Santa and snowman in the box and placed them by the painting of Mom and I on her favorite chest of drawers, the painting where I kiss my finger and touch Mom’s smiling lips each morning. 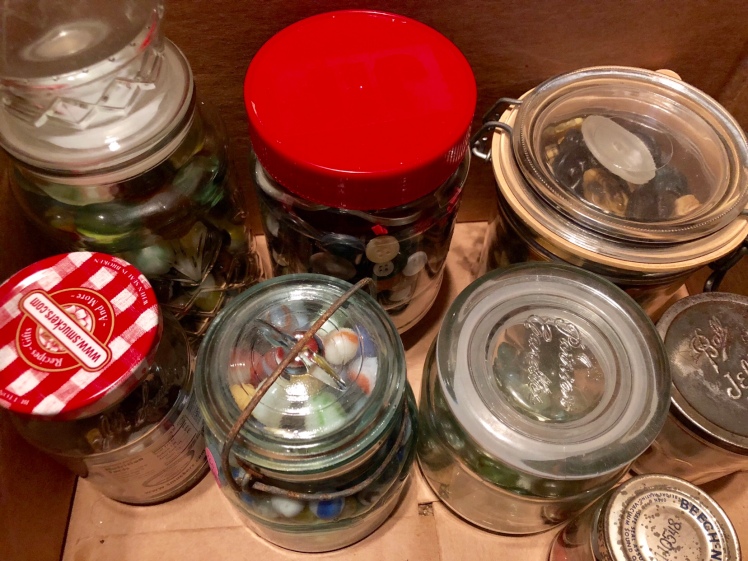 Digging back into the box I found jar after jar of Mom’s beloved old buttons, and then noticed a folded up letter in my Mom’s beautiful handwriting. “Dear Paul…” 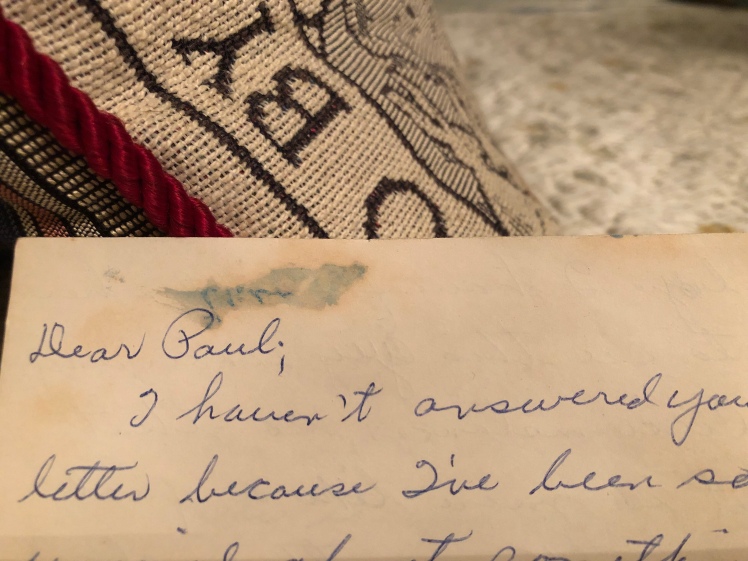 At first, I thought the letter was addressed to my oldest brother Bud who was named Paul after our father. As I began reading, I realized it was a letter she had written to Dad soon after the divorce but had never mailed. Mom wrote the most wonderfully newsy letters, and I realized just how difficult this particular letter must have been for her to write.

“Denise is such a big girl. She talks like a six-year-old.” 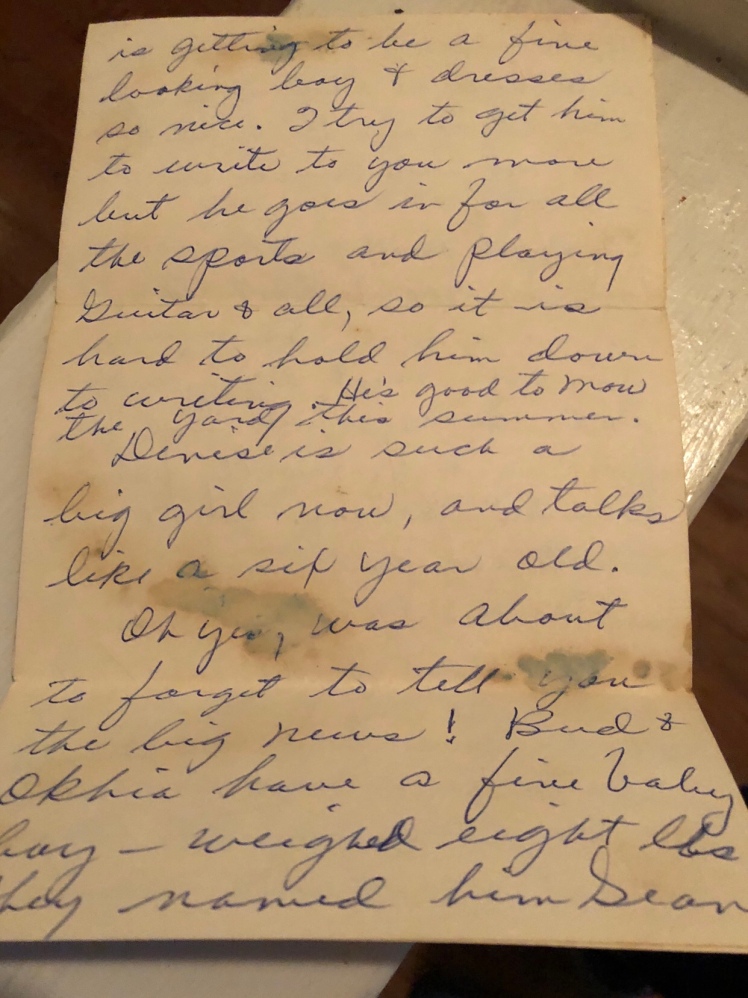 She told him that she was going to have to sell the house soon, as she couldn’t afford to live there anymore. Dad would never let Mom work during their almost twenty-four years of marriage, so when he left her at age forty-two with a toddler, a ten-year-old, and a teenager still at home, she had few options other than housecleaning and babysitting. Quite a change from her life as a Colonel’s wife.

And still, I looked at the jars of marbles, the sparkly and colorful pieces of jewelry in the snowman box, and all I could do was smile. She handled life’s challenges with such grace and humor.

From my mother I learned so many things; to bloom where you are planted, to be joyful and make the best of the hand you have been dealt. I learned to make your space happy and beautiful, no matter how humble it is. I learned to give to others, to help where I can, no matter how little I may have. So many precious gifts from my angel, including putting these gifts put into my path on a day where I just needed to feel my mother, my angel, near to me. The most important thing I learned? Love is forever, boundless.

4 thoughts on “On Angel Gifts”